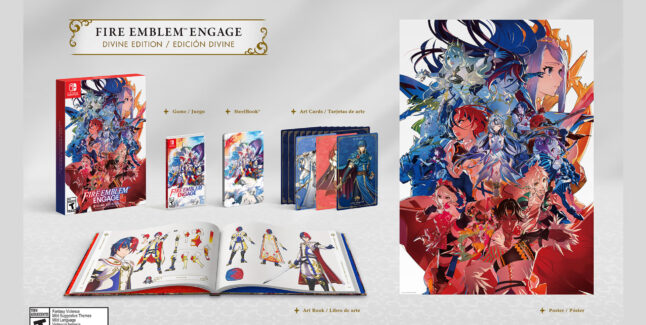 Here we will show you how to unlock all Fire Emblem Engage codes with a cheats list that’s valid for the Nintendo Switch-exclusive title (where available).

How to get your own unique Bonus Code: You can receive free Bonus Items (Heroes Weapons & S-Rank Bond Rings!) from the Order of Heroes Item Set!

Fire Emblem Engage has a collaboration with Fire Emblem’s Mobile Game, Fire Emblem Heroes! By linking your nintendo account to Fire Emblem Heroes, you will be able to obtain the Nintendo Switch Game Bonus Code for the “Order Of Heroes” Item Set, which features 3 weapons and 3 S-Rank Bond Rings.

Note: The Nintendo Switch Game Bonus Code + 5 Orbs reward can be redeemed starting 5:00 PM PT on January 19, 2023.
The download code is valid for 150 days after being received. Please be sure to input the download code as explained in Step 3 within 150 days.

The Weapons are a Sword, Axe, and Lance that the main characters of Fire Emblem Heroes uses:

The S-Rank Bond Rings are based on the Askr Trio:

The Nintendo UK store is advertising a pin, with the Lythos insignia, and A2 poster of the in-game mural. The pin is also available in other stores.

Obtain Emblem Bracelets to Engage with more Emblem characters and get support items and new accessories with the $30 / €30 Paid DLC for the Fire Emblem Engage game.

Pre-order the Fire Emblem Engage Expansion Pass today and download Wave 1 when it becomes available to meet Edelgard, Dimitri, and Claude (as one Emblem Bracelet) and take on Divine Paralogues to get Tiki as an Emblem character. As more waves become available, you can test your mettle in even more Divine Paralogues, obtain Emblem characters and accessories, and experience a brand-new story with added characters and locations.

Wave 1 Important Note: There are some handy items in the Paralogue such as a Rewarp staff. You cannot Warp / Rewarp / Rescue / etc. units inside the sealed areas until you unlock them.

Note: Details to be revealed later.

Note: Details to be revealed later.

How To Unlock New Game + and the Extras Menu: Complete the game once. This will not only let you replay the game with your previous progress like weapons and upgrades intact, you’ll also expand the Extras Menu, presumably with a Theater and such. You also unlock end-game Outfits for finishing the game.

How to use Emblem Rings: Equip Engage Rings to the character of your choice. Summon valiant heroes like Marth and Celica with the power of Emblem Rings and add their power to yours in this brand-new Fire Emblem story. Aside from merging appearances, Engaging lets you inherit weapons, skills, and more from these battle-tested legends.

Who can you unlock as Emblem Rings?: There are 12 Emblem Rings in total for you to unlock on your adventure, they summon these valiant heroes from past Fire Emblem games:

Emblem Ring character bios shown at 10:22 minutes into this video:

Mix & Match Fighters with Emblem Rings: Your fighter takes on the abilities of who’s in the Emblem Ring (s)he wears, melding the two characters as it were.

There’s also a gacha random chance system in place for you to win Minor Rings that can be merged up to S-tier for a (random?) strong ability for you to give to your other team members for use in battle when the going gets tough.

How to unlock Outfits with Amiibo: Each Fire Emblem-themed Amiibo can be scanned once a day, and you can scan a total of five Amiibo per day. Each Fire Emblem Amiibo unlocks 1 Fashion Ticket and 1 Music Ticket and you pick the outfit and song you want, so you can mix and match.

Note: For certain characters’ attire, you’ll first need to unlock their Emblem Ring before you can buy their Outfit with a Fashion Ticket.

Watch a short informative showcase of all the available Amiibo Outfits. As well as the outfits you unlock after beating the game and unlocking everything.

Auto-organization Option Tip: Setting up your units pre-battle and equipping them in an optimal manner is streamlined for those of you who don’t want to tinker with the settings manually. Fire Emblem Engage has an auto-organization option available in the pre-battle phase, which sorts all your currently available gear to the most suited fighters and can even switch who is wearing which Emblem Ring in order to give you the best match-ups!

In a war against the Fell Dragon, four kingdoms worked together with heroes from other worlds to seal away this great evil. One-thousand years later, this seal has weakened and the Fell Dragon is about to reawaken. As a Divine Dragon, use rich strategies and robust customization to meet your destiny — to collect 12 Emblem Rings and bring peace back to the Continent of Elyos.

Break Note: So regarding Break status, when a character is attacked with a weapon they have a weapon triangle disadvantage against, they suffer Break. Break makes said character unable to take action (they basically lose their weapon) for the duration of the turn until the end of the next fight. Allowing you to attack that character without damage repercussions.

Up next, more information…

More of your questions answered…

Finally, here’s 20 handy tips and tricks to help ease you into the characters, classes, and systems!

Do you know of any Fire Emblem Engage cheats or unlockables? Let us know in the comments, you’ll get credit for finding out. – Thanks for visiting!