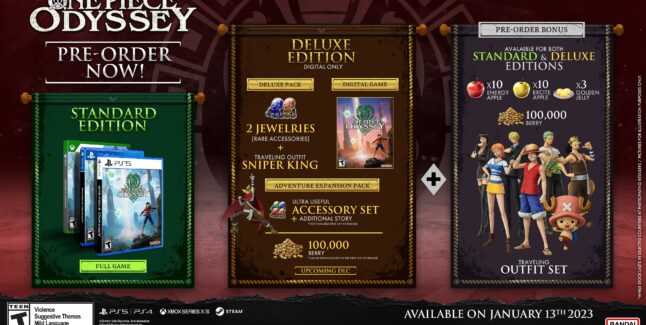 Here we will show you how to unlock all One Piece Odyssey codes with a cheats list that’s valid for the PC (Steam), PS4, PS5 & Xbox Series X / S versions (where available).

Index of One Piece Odyssey Guides:

Playing & Saving in the Demo unlocks a Bonus for the Full Game:

One Piece Odyssey How To Unlock All Bond Arts

How To Unlock All Bond Arts:

To defeat powerful enemies, you can use Bond Arts, the crew’s coordinated combat techniques.

You unlock Bond Arts for characters by going on Memory Link Quests. These Side Episodes require specific the Straw Hat Crew members to work together to resolve the frayed edges of “Memoria” known as “Hysteria”, a fractured world deeper within “Memoria”.

When you go on adventures in “Hysteria”, it features unexpected and nostalgic encounters… by completing these Memory Link Quests, all participating crew members acquire Bond Arts: powerful, team-based combat skills!

One Piece Odyssey Tips and Tricks

For players who are new to One Piece, Bandai Namco have added plenty of “Grand Logs” to the game – which are collections of videos where you can review events that the Straw Hat Crew experienced in the manga and anime. After six years of development, the developers made sure all players can enjoy this game!

ONE PIECE ODYSSEY is a modern take on the classic JRPG with a ONE PIECE twist. Dive into the various systems that come together to make ONE PIECE ODYSSEY an unforgettable experience for all comers, from JRPG and ONE PIECE veterans to newcomers of the beloved series!

Note: In addition to Luffy, you can play as Zoro, Nami, Usopp, Sanji, Chopper, Robin, Frankie, and Brook!

Hint: In Water Seven, the crew rides Yagara bulls while exploring the city. You can also take a sightseeing tour through the city’s canals while riding the Yagara.

Character Tip: Each Straw Hat Crew member has a unique character action. For example, Luffy can use Gum-Gum Rocket to traverse paths that cannot be traveled to on foot.

Special Moves Tip: While the Straw Hat Crew’s iconic Special Moves will be regained as the story progresses. The strength of Special Moves themselves can be increased (upgraded) by using Cube Fragments obtained during exploration.

Tip Roundup: Follow these tips to excel in combat and become a master pirate in “One Piece Odyssey”!

In this turn-based RPG where you can swap between playing as the crew from the Straw Hats to uncover the secrets of a new island called Waford.

These are all One Piece Odyssey cheats on Xbox Series X, PS4, PS5 & PC found so far, as cheats have been replaced by DLC. We also made the handy One Piece Odyssey guides listed above to help you with tips and tricks for the game!

Do you know of any One Piece Odyssey cheats or unlockables? Let us know in the comments, you’ll get credit for finding out. – Thanks for visiting!