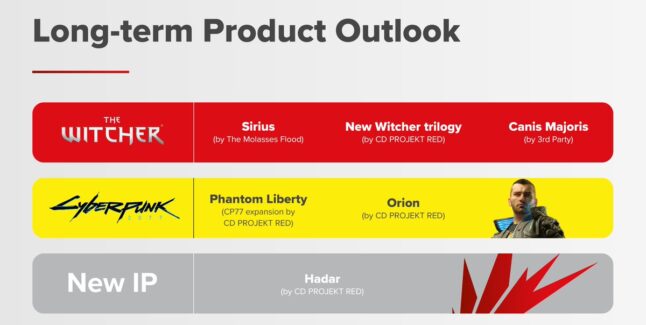 Read about the full game details below…

Listen to the announcements here in the CD Projekt Group webcast:

Game developed by The Molasses Flood with support from the CD PROJEKT RED team, set in The Witcher
universe. Compared to existing CD PROJEKT RED games, this one targets a much broader audience. Sirius
will include single-player and multiplayer gameplay.

This project launches the new Witcher trilogy, expanding the universe presented in past Witcher games. The saga will consist of three games which we plan to release during a six-year publishing cycle [editor: count on it to be 13 years again like the first Trilogy], starting with the release date of Polaris itself.

In technical terms, the second and third part of the saga will be based on the foundation which we put in place for Polaris. By following this approach we intend to improve our game development pipeline without giving up on any of our artistic ambitions, or on our intent to raise the bar ever higher with each successive release.

A full-fledged release set in The Witcher universe, to be developed by an external studio under the supervision of experienced developers who have previously worked on Witcher games. In terms of technology – we intend to use Unreal Engine 5 and the toolset created for Polaris.

A Cyberpunk release which will further develop the potential embodied by this universe. Project Orion will be developed by CD PROJEKT RED North America, which will comprise the newly created Boston hub along with our existing Vancouver team. This studio is separate from The Molasses Flood (which is working on Sirius and is also based in Boston). Establishing a new studio – CD PROJEKT RED North America – will enable us to fully tap into the North American talent pool.

A new original IP. For the first time in its history, CD PROJEKT RED is developing an entirely new universe from scratch. Early conceptual work began in 2021. As of the publication date of this document there is ongoing work on the foundations of this world – laying the setting for a third separate product line in the future.

Which CD Projekt game(s) are you most excited about?