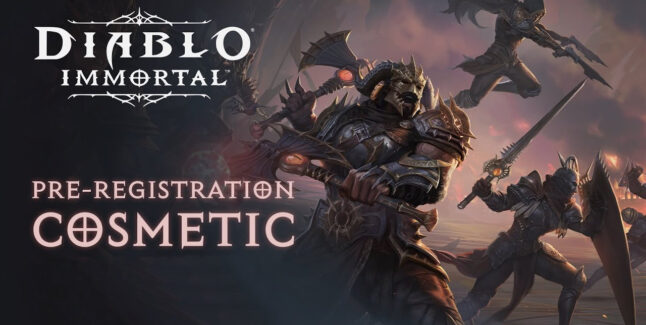 Here we will show you how to unlock all Diablo Immortal codes with a cheats list that’s valid for the PC, Android & iOS versions (where available).

Modeled after the Brotherhood of the Horadrim, an ancient collective of mages and wizards selected by archangel Tyrael, the Horadrim Cosmetic set blankets those who wear it in gilded excellence. Forged in light for only the most devout adventurers, the set morphs to its wearer’s martial expertise, creating a distinctive look for each class.

Note: Players from the following regions cannot pre-order Diablo Immortal on iOS from the App Store but can still download and play Diablo Immortal on PC, Android, and iOS once it releases on June 22 PT for: Hong Kong, Indonesia, Macao, Malaysia, The Philippines, Singapore, Taiwan, and Thailand. Diablo Immortal will also release on the same date in Vietnam but on PC only.

Complete Activities in the game to earn Battle Points to unlock each Rank’s reward. Battle Points are earned by claiming them in the Codex.

Top 10 tips for beginner players in Diablo Immortal. From basics to picking your name, to picking up all dropped loot you find automatically by activating that in the game’s Settings menu, which will allow you to salvage gear you don’t need into crafting materials you’ll definitely need later in the game.

Don’t forget to pay attention to your surroundings and the map, as an orange skull on the map will indicate a Legendary piece of gear. Also, Daily Quests give great bounty drops!

Up next, what Classes are the best in Diablo Immortal. Here’s the rankings. Spoiler, you can’t really go wrong with your favorite class.

Ultra graphical settings for Diablo Immortal will only be available on PC and select iPad devices.

Which servers will be available to play for my region?

There are all Diablo Immortal cheats found on Android, iOS & PC so far. We also made the handy Diablo Immortal guides listed above to help you with tips and tricks for the game!

Do you know of any Diablo Immortal cheats or unlockables? Let us know in the comments, you’ll get credit for finding out. – Thanks for visiting!