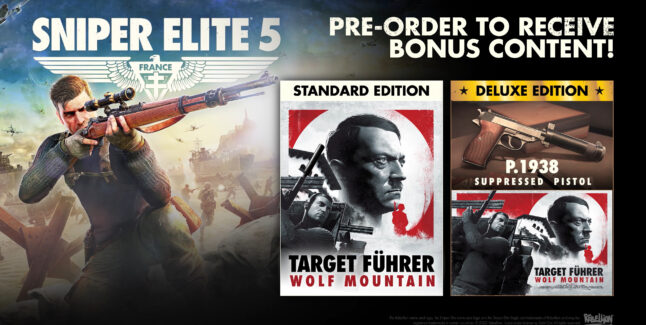 Here we will show you how to unlock all Sniper Elite 5 codes with a cheats list that’s valid for the PC, PS4, PS5, Xbox One & Xbox Series X versions (where available).

These old Sniper Elite cheats may work again in all versions of Sniper Elite 5, although it’s unconfirmed (and unlikely).

When choosing a profile name, enter the following names, as these names act as codes to unlock cheats.
The profile name to type as your profile name is followed by the in-game effect.

Sniper Elite 5 How To Kill Hitler

Sniper Elite 5 offers a level of customisation never seen before in the Sniper Elite franchise, you will be able to change a weapon’s stock, magazines, receiver, barrel, scopes and iron sights as well as the materials. This will also enable you to finesse your weapons to best suit your playstyle, whether that is stealthy and methodical, ‘run and gun’, or a mixture of the two.

Offering insight from the development team as well as from the game’s military advisor and motion capture artist Paul Biddiss, this spotlight features interviews and gameplay footage showcasing the new traversal, sneaking and takedowns in Sniper Elite 5, including new non-lethal options.

Paul Biddiss, the military advisor and action co-ordinator for a number of high-profile movies and TV shows, provided his expertise to the Sniper Elite 5 development team as well as being the motion capture artist for Karl Fairburne, helping to ensure the highest possible level of authenticity to his movements and takedowns. Speaking about his involvement in the game Paul said: “All the takedowns are realistic to the training that was given to SOE operatives… everything is realistic. There is no embellishment.”

Learn about the details of the other stealthy options open to Karl including new traversal mechanics which open up hidden areas of the maps as well as giving you alternative routes to approach your objectives. You will also have to consider the audible distance of both your weapon and ammo when taking a shot if you want to remain undetected.

For Sniper Elite 5 you will have a host of non-lethal options at your disposal including the ability to incapacitate the enemy with non-lethal takedowns and ammunition. These options provide you with even greater scope to approach each mission and game scenario in a way that best suits their playstyle and their objective.

The latest installment in the award-winning series, Sniper Elite 5 offers unparalleled sniping, tactical third-person combat and an enhanced kill cam. Fight your way across the most immersive maps yet, with many real-world locations captured in stunning detail, and an improved traversal system that lets you explore more of them than ever before. Let’s take a look at how it’s done when you first get started playing.

There are no confirmed Sniper Elite 5 cheats on Xbox One, Xbox Series X, PS4, PS5 & PC yet. So until they are discovered, we made the handy Sniper Elite 5 guides listed above to help you with tips and tricks for the game!

Do you know of any Sniper Elite 5 cheats or unlockables? Let us know in the comments, you’ll get credit for finding out. – Thanks for visiting!