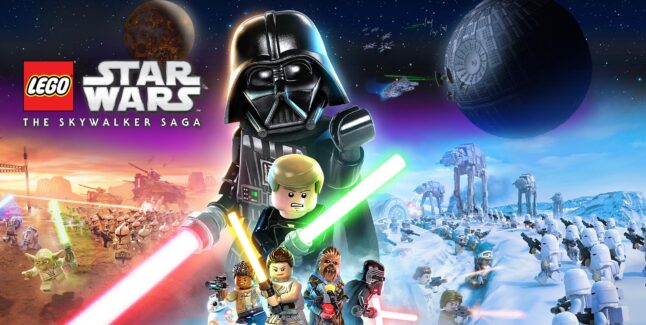 Our 100% Lego Star Wars: The Skywalker Saga walkthrough will guide you through the beginning to ending moments of gameplay with strategy tips for this action-adventure Lego game on the Switch, PC, PS4, PS5, Xbox One & Xbox Series X.

Lego Star Wars: The Skywalker Saga is rated PEGI 7 in Europe & ESRB E10+ in America for everyone 7 to 10 years or older. This game includes Cartoon Violence, Fear, Comic Mischief.

The galaxy is yours in LEGO Star Wars: The Skywalker Saga. Experience memorable moments and nonstop action from all nine Skywalker saga films reimagined with signature LEGO humor.

Play through all nine saga films in a brand-new video game unlike any other. With over 300 playable characters, over 100 vehicles, and 23 planets to explore, a galaxy far, far away has never been more fun!

Lego Star Wars: The Skywalker Saga is a third-person action-adventure with an open world hub.

Unlike previous Lego games in which players had to advance through the story in a linear order, players can now choose to start the game from any of the main Skywalker Saga episodes and complete them in any order they wish. Each episode has their own hub filled with planets featured prominently in each respective film that can be visited and explored. Each episode will have five story missions each, a total of 45 levels.

Welcome to the Lego Star Wars: The Skywalker Saga walkthrough!

Brian will be your voice-over commentator showing you around the game’s areas.

Covered will be the entire STORY, Prepare for FREE PLAY, take on FREE PLAY collecting all Minikits, True Jedis and Challenges and then finish with the FREE ROAM clean up.

Complete what is believed to be an unmissable challenge for beating the ultimate lap time, which was unclear of the time, but he went super slow in his first attempt and was not able to miss.

Let’s reach the Silver Tier of True Jedi earning us an extra Kyber Brick which you will likely do too.

Level 4: Outmanned But Not Out-Gungan-ed Walkthrough

True Jedi requirement in Level 4 “Outmanned But Not Out-Gungan-ed” is: 35,000 Studs.

Level 5: Now This is Podracing Walkthrough

We do reach the Purple Tier of True Jedi earning us an 3 extra Kyber Brick AND the Trophy / Achievement “You think you’re some kind of Jedi?” and we also snag two more Minikits, and to find them all you can check our full guide to all Collectibles in the game linked at the top of this page.

Level 1: A Wrestle with Wesell Walkthrough

There is a challenge completed for Defeating Zam Wesell within 4 minutes. IF you don’t, not to worry as we’ll return to A Wrestle with Wesell in FREE PLAY and will cover all items needed for completing the level 100%!

[Work-In-Progress: More chapters coming as soon as they are available]

Thanks to Lego Star Wars & Brian for the walkthrough videos.