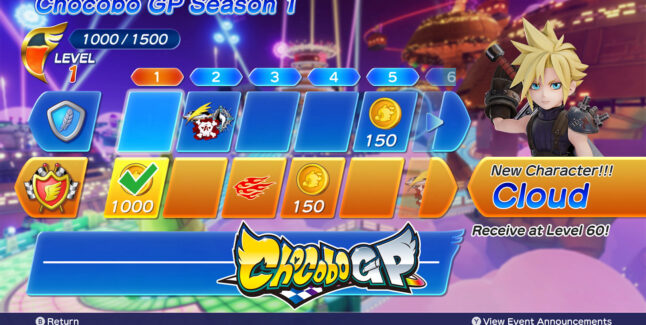 Here we will show you how to unlock all Chocobo GP codes with a cheats list that’s valid for the Switch title (where available).

Play the Story Mode campaign to follow Chocobo & friends on their delightful racing adventure to learn the rules of the game in Chocobo GP! Race through enchanting locations to unlock characters and courses. Set out on a charming campaign where Chocobo and friends enter a racing tournament to grant their greatest wish!

Pick up some exclusive gear by exchanging the gil and mithril you have earned for various items! Unlock numerous customization options for your characters and vehicles. Sweep to victory in the Chocobo GP looking exactly how you want!

Note: The number of characters available to play in the Lite version differs from the number available in the full game.

An optional Prize Pass will be available for purchase, granting players access to additional rewards and the ability to earn resources, such as Gil, more efficiently. Gil can be used to purchase various rewards in the game’s Gil Shop. With the Season 1 Prize Pass you also get tons of Team Stickers.

How To Unlock DLC Characters:

Join Chocobo and friends as they hit the track in a variety of wacky vehicles!

Learn the basics in story mode, then take on all-comers in the game mode of your choice! Use classic magic spells like fire and aero to blast the competition, or even turn the tables in a miracle comeback with each character’s unique abilities!

Magicite Note: As you race around a course, you’ll see Magic Eggs. If you touch one, you’ll get a piece of magicite, which lets you cast magic to help you or harass your rivals.

Ultima Tip: Here it is – the ultimate magic. Your magicite can transform into Ultima if you continue to collect Magic Eggs while your Magicite Stocker is full.

These are all Chocobo GP cheats on Switch yet. So until more are discovered, we made the handy Chocobo GP guides listed above to help you with tips and tricks for the game!

Do you know of any Chocobo GP cheats or unlockables? Let us know in the comments, you’ll get credit for finding out. – Thanks for visiting!