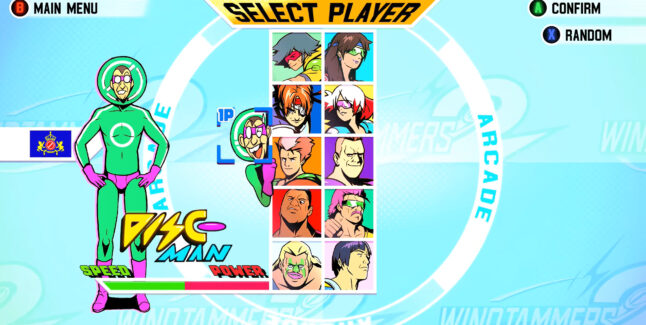 Here we will show you how to unlock all Windjammers 2 codes with a cheats list that’s valid for the PC, PS4, Switch, Xbox One & Stadia versions (where available).

How to unlock the Disc-Man Secret Character in Windjammers 2:

Go to the character select screen. This can be done on any difficulty level, in any game mode (from arcade, multiplayer to lan). Once you’re on the “Select Player” menu, simply spin the left controller joystick in a quick circle between 4 character for a few seconds until Disc-Man appears on the side of the character selection screen. From that point on you can choose him as a playable character.

DiscMan shares his speed and power attributes with Steve Miller, he also shares his super move with Hiromi Mita.

Here are the control basics on PC:

To LAUNCH the disk: As the player is holding it, which you do by running into the disk or simply staying put as it flies towards you, press the A Button + Direction.
To LOB the disk: Same as above, while holding it, press the B Button + Direction.
To “Quick Throw” the disk: As the disk is about to contact the player, parry it by hitting the X Button, or X+Direction.
To “Launch” the disk up into the air to set up for a charged up move: Same as above, parry it but by hitting the A Button (WITHOUT A DIRECTIONAL INPUT).
After the “Launch”: Hit the A Button as the disk falls to throw it, or the B Button to Lob it.
To Curve the Disk: Twist the stick as you throw it.
To “Special”:
When the meter is full and your character is powered up visually, while holding the disk, press both the A Button and the B Button.
The Jump Button: Can be used to jump up in the air when the disk is falling, such as after a “Launch” to “SPIKE” The disk downwards with the A or B button I believe.
Special Attack: Use a Special Attack (A+B) as the disk is falling after the “launch set up”.

There are no Windjammers 2 cheats on Xbox One, Switch, PS4, PC & Stadia yet. So until they are discovered, we made the handy Windjammers 2 guides listed above to help you with tips and tricks for the game!

Do you know of any Windjammers 2 cheats or unlockables? Let us know in the comments, you’ll get credit for finding out. – Thanks for visiting!