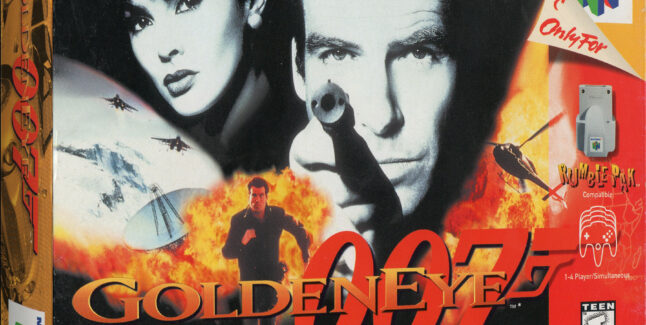 Oh wow! The N64 GoldenEye 007 HD 60FPS Remaster achievements have leaked, indicating the remastered classic FPS will be coming to Xbox One, Xbox Series X and possibly even Switch soon! Read on for the full details…

The N64’s 1997 GoldenEye 007 game based on the 1995 movie by the same name is the stuff of legends, it completely revolutionized first-person shooter controls by making them work on a console controller. Of course 24 years later it feels outdated — unless you refuse to take off your nostalgia goggles — which is why back in 2008 Microsoft had Rare work on a HD 60FPS remaster for Xbox 360’s XBLA that would also update the controls to a twin-stick control method to feel smooth in this day and age.

Although that near-finished Xbox remaster leaked last year — watch a full HD playthrough here-under! — the game stayed unreleased officially, which seemed to indicate Microsoft wasn’t able to get all the rights to release it from Nintendo for the original game and MGM Studios for the franchise, music rights, etc.

What’s awesome about having a James Bond GoldenEye 007 remaster with updated features is that it even allows players to switch between the modernized HD and original N64 visuals. Something nostalgic that was missing from the GoldenEye 007: Reloaded enhanced port back in 2011, which was still quite enjoyable to play through.

But things didn’t end there, and James Bond rights talks seems to have started back up last year. Back in October 2021 Nintendo got the N64 version unbanned Germany for the first time, which clearly hints at either an emulated N64 version for Switch Online Expansion Pack subscribers or (perhaps wishful thinking) an updated Switch version being released as well in exchange for Nintendo allowing a remaster to be made.

So that just leaves MGM Studios, which as it happens is holding the 60th Anniversary of the James Bond franchise in 2022 and are promising a year-long celebration of the franchise. All good indicators this GoldenEye 007 Remaster could be happening soon.

Then suddenly this week the actual Xbox achievements got leaked further cementing this is actually happening soon, as a few players in the world seem to be unlocking achievements already! At least an Xbox version seems to be in the final rounds of testing with the achievements active. Let’s hope for a confirmation from Microsoft (and Nintendo?) soon.

Here’s what the internet has to say about these leaks:

Are you excited to play the GoldenEye 007 Remaster?

I am! I loved the XBLA Perfect Dark Remaster too. Played through it with Josh in online co-op back in the Xbox 360 days! 🙂