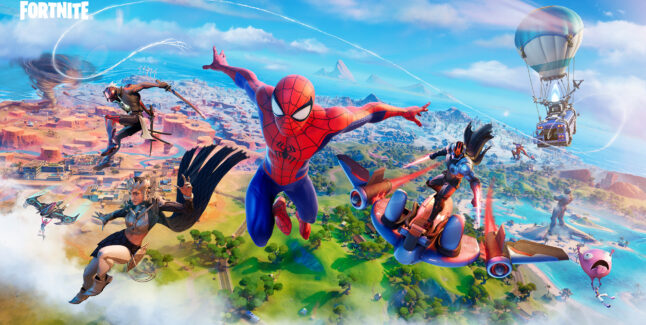 After some upgrading downtime, Epic Games has revealed the first look at the next chapter’s brand new map with the Fortnite Chapter 3 trailer.

The Fortnite Island has been flipped and a new one has been revealed.

Due to a particularly cold winter, the first thing you’ll notice about the Island is that the western half’s a wintry biome. Perhaps stop by the suburban Greasy Grove, the industrial Logjam Lumberyard, and other locales.

Like warmer weather? To the east are the tropics, with coastal keys, palm trees, and weathered sights to see. Although The Seven have outposts all throughout the Island, the tropics are home to their home, the “Sanctuary.” This compound is right next to the coast, where you can get a clear view of the colossal rock statue of The Foundation. And speaking of colossal, the towering, web-covered Daily Bugle building is also in the area.

Like even warmer weather? In the south you can find the desert (some of it decorated in snow), but this desert isn’t barren on interesting places. Go off-road racing at Chonker’s Speedway, revel in cozy living at Condo Canyon, and something that will wet even the driest eyes, “come on down” to the returning Butter Barn.
A fresh slate of weapons awaits you on the Island.

What characters can you unlock in Fortnite Chapter 3 Season 1?:

With the Chapter 3 Season 1 Battle Pass, unlock characters like…

Here’s a rundown of what’s new:

Made for distance! The Ranger Assault Rifle is forceful at medium range and quite capable at long range.

Auto Shotgun
An automatic ally that lays down some serious firepower. The Auto Shotgun may not deal as much damage as the Striker Pump per shot, but it has a faster fire rate and reloads two shells at a time.

Stinger SMG
Appropriately named, the Stinger SMG deals high damage to both opponents and structures. It stings at medium range more than one may expect!

Sidearm Pistol
A trusty weapon to have by your side, the Sidearm Pistol is an accurate weapon that deals high damage at medium range and high headshot damage at close range. Don’t underestimate it!

Are you excited for Fortnite Chapter 3?