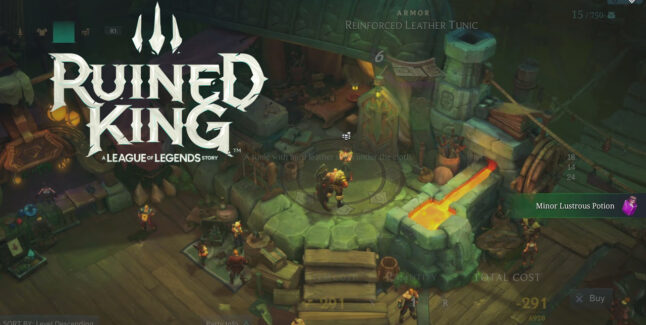 Here we will show you how to unlock all Ruined King: A League of Legends Story codes with a cheats list that’s valid for the PC, PS4, PS5, Xbox One & Xbox Series X versions (where available).

How to get unlimited money and items in Ruined King: A League of Legends Story?

Take a look at the infinite money & items cheat in action in Ruined King: A League of Legends Story (PS4 version).

Buy the Standard or Deluxe Edition of Ruined King: A League of Legends Story before December 16, 2021 to receive…

Ruined King: A League of Legends How To Do 50% More Damage

How to do 50% more damage per character:

The secret Riot Games doesn’t tell you about increasing your damage in Ruined King. Simply buy the character skins that feature a damage increase.

Ruined King: A League of Legends Story Tips and Tricks

Check out some handy tips and tricks from the Airshop developers of Ruined King.

Watch the recap of the official Riot Forge Showcase to see Runeterra like never before. Join us in bringing players old and new on an adventure through one of gaming’s richest universes, where you can interact with our champions to experience never-before-heard stories and explore never-before-seen places.

All of your encounters with enemies will play out in the Combat Scene. Combat is turn-based and ends when all enemies have been defeated. Your Champions’ Health and Mana pools will persist from battle to battle, so be sure to conserve your resources for the more challenging encounters.

Fighter HUD
Each champion and enemy has a fighter HUD that displays key stats such as XP Level, Health, Mana and applies buffs and debuffs.

XP Level
This value displays the character or Champions’ Experience (XP) Level which is a general gauge of their power and combit fortitude. The maximum level is 30.

Earning XP
All champions will earn experience points by completing quests and combat encounters, whether they are in the Active or Away party. Earn Bonus XP by defeating enemies that are above your party level and through feats during combat encounters.

Leveling Up
When a Champion earns enough experience, their XP Level will increase. Each level rewards that Champion with permanently increased stats and the potential for new combat Abilities, Ability Upgrades, and Runes.

Health
Character health pools are reduced when they take damage during exploration and combat encounters. When a character’s health is depleted, they will be knocked out and no longer able to perform actions until they are revived or the combat encounter ends. Health can be replenished through Champion abilities, consuming items, and resting.

Mana
Mana is consumed when performing Lane Abilities during combat encounters. Mana can be replenished by consuming items and resting.

Overcharge
Performing certain instant abilities during a combat encounter will generate Overcharge.
Overcharge acts like bonus mana that can be used to cast Lane abilities. Overcharge can only be used during the encounter it is earned and does not carry over.

Buffs and Debuffs
Many abilities and consumed items can grant status effects to a fighter, displayed as a Buff (positive effect) or a Debuff (negative effect). The area above the Combat HUD will display any applied Buffs and Debuffs. Some effects are permanent while others are temporary and can be dispelled. Learn more about applied buffs and debuffs by entering Inspect Mode.

Ultimate Meter
Performing Instant and Lane abilities during a combat encounter will build the Ultimate Meter, a shared pool that anyone in your party can use to perform Ultimate Abilities. The Ultimate Meter resets at the beginning of each battle.

Initiative Bar
The Initiative Bar shows the turn order for the fighters during a combat encounter. When a fighter’s portrait reaches the front of the bar, it will be their turn. During a fighter’s turn, they can select from their available abilities. While browsing abilities, a preview will be shown of where the fighter will return after an Instant action, or where their cast time begins if performing a Lane Ability. When a casting fighter portrait reaches the front of the bar, they will perform the Lane Ability, and then return to the Initiative Bar to wait until their next turn.

Hazards
Hazard Initiative Bar Regions will appear when entering combat while inside a hazard in the environment. These regions are harmful to your party.

Boons
Boon Initiative Bar Regions are activated when interacting with Shrines in the environment. They provide beneficial effects exclusively to your party.

Wildcards
When a Hazard or Boon is not present, a Wildcard Initiative Bar Region will be randomly selected at the beginning of combat. These regions can benefit all fighters, including enemies.

Combat Ability Menu
During a fighter’s turn, you can browse between 3 categories of unique abilities broken up by categories: Instant, Lane and Ultimate. After selecting an ability, you select the target for ability and then the turn plays out.

Instant Abilities
Instant Abilities have cast times that delay them from being performed. Cast times are previewed on the Initiative Bar as an ability is highlighted. Performing a Lane Ability costs Mana. If Overcharge is available, it will be consumed first, before consuming Mana.

Lane Switching
When selecting a Lane Ability, you can switch between the Balance Lane (default), Speed Lane and Power Lane using the Lane Up and Lane Down buttons. Switching lanes allows you to modify your cast time and manipulate your positioning on the Initiative Bar. Additionally, many enemies will have applied buffs that can only be counteracted through specific lanes. Be sure to Inspect your opponents and get the upper hand through Lane Switching.

Potion Bag
During a fighter’s turn, you can open the potion bag to view potions in your Inventory. Using a Potion behaves like an Instant Ability and is performed immediately.

Quick Strike
Use this action to quickly perform your base Instant Ability on the enemy with the lowest Health value.

Inspect Mode
During any of your Champion’s turns, you can enter Inspect Mode and highlight the Initiative Bar, the Champion HUDs, or the enemy HUDs to display expanded information that can guide your strategy during combat. While focusing on the Initiative Bar, you will see the descriptions of abilities that are being cast. While focusing on a fighter, you can view their expanded stat detail, as well as any applied buffs and debuffs.

Multi-Wave Battles
When an encounter is triggered, with more enemies than can be fought at once, they will be split up into multiple waves fought as one continuous battle. You will see an indicator on screen showing the number of total waves and which wave you are currently on.

Fleeing Combat
If you find yourself needing to escape the battle, you can attempt to Flee when it is your turn, by holding the Flee button. Attempting to Flee will take up that fighter’s turn.

Skipping Combat (Story Difficulty)
When playing the game on the Story difficulty setting, you can skip a combat encounter from the pause menu, and automatically gain the loot and experience from it.

Do you know of any Ruined King: A League of Legends Story cheats or unlockables? Let us know in the comments, you’ll get credit for finding out. – Thanks for visiting!