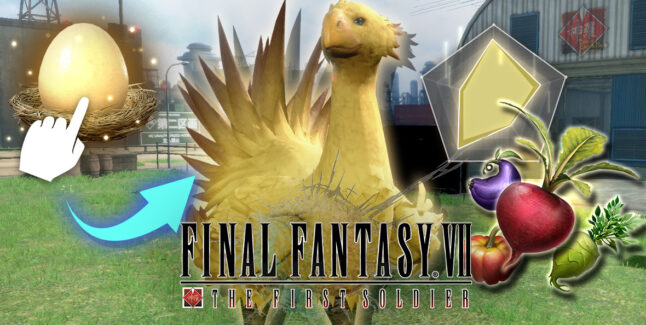 Here we will show you how to unlock all Final Fantasy VII: The First Soldier codes with a cheats list that’s valid for the iOS & Android Mobile device versions (where available).

How to get 9999 Gil at the start of Final Fantasy VII: The First Soldier:

After that’s done, stay standing still in front of the Vending Machine and the Gil stash will respawn every 2 seconds after you automatically pick it up by just standing there. Keep doing this until your Gil count maxes out at 9,999 Gil! Easy money to get all the upgrades in the Tutorial! 😀

Update: Awww it looks like your character no longer holds the Gil earned in Tutorial in the main game.

Final Fantasy VII: The First Soldier achieved over 2 million pre-registrations, which means all players will receive the below gifts! Be sure you log in each day to collect them for free.

How to unlock Moogle Skins:

Additionally, with the “collection” feature, you can exchange “data pieces” you find in battle for skins. The first items available in the collection are Moogle-themed! They include…

Buy the Season Pass to get more rewards. Each season lasts about three months and will feature its own season pass. As your season pass level increases by completing daily and weekly challenges, you will unlock various special rewards. The rewards include…

Final Fantasy VII: The First Soldier How To Hatch Chocobos

How to hatch Chocobos once you get an egg: As mentioned above, Ateam Entertainment and Square Enix have revealed that every player will receive one Chocobo Egg for the 300,000 pre-registrations milestone.

Chocobo Eggs can be incubated, hatched and raised at the Chocobo Farm in order to breed them for battle. The farm can house up to seven Chocobo Eggs, which can be fed with special items to increase their Speed, HP and other stats.

There are also skins for chocobos! Customize your chocobos to fit your playstyle.

Here’s a quick Beginner’s Guide breakdown of what you should expect. Diving much deeper into mechanics, but to the point for everyone to can get the idea of what they should expect while playing this unique Battle Royal!

Do you know of any Final Fantasy VII: The First Soldier cheats or unlockables? Let us know in the comments, you’ll get credit for finding out. – Thanks for visiting!