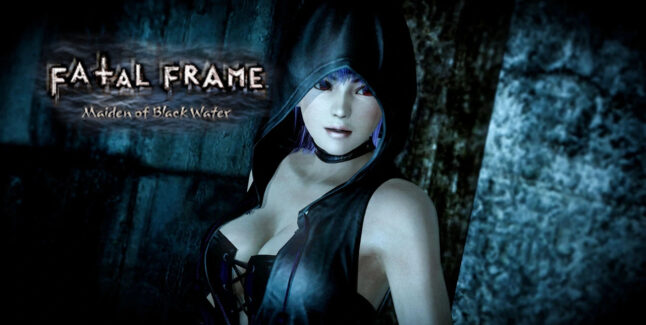 Here we will show you how to unlock all Fatal Frame: Maiden of Black Water codes with a cheats list that’s valid for the PC, PS4, PS5, Switch, Wii U, Xbox One & Xbox Series X versions (where available).

Take a look at the Fatal Frame 5 cheats below…

How to unlock the post-game Bonus Chapter starring Ayane from the Dead or Alive & Ninja Gaiden series:

Complete the main story of Fatal Frame: Maiden of Black Water to the ending to unlock the Ayane Bonus Chapter.

The secret mission Ayane Chapter can be played once all sections of the main story from “First Drop” to “Last Drop” have been completed. The 4th playable main character Ayane is a Kunoichi from the Hajinmon sect of the Mugen Tenshin clan. In contrast to Yuri and Miu, she is unable to use the Camera Obscura. However, she is able to make full use of her ninja abilities and is adept at working under the cover of night. She can hide from view and avoid the ghosts in order to accomplish her mission. Enjoy a fresh kind of playstyle through this unique chapter.

Fatal Frame: Maiden of Black Water How To Unlock All Outfits & Accessories

Tip: New character outfits can be accessed from the Costumes section.

The original lineup of costumes has been slightly altered, and new costumes for Yuri, Miu and Ren have been added.

Find out how to unlock all outfits in Fatal Frame: Maiden of Blackwater:

Both original 2014 and new 2021 outfits can mostly be obtained by completing the game to its various different endings.

Secret outfits and other unlockables linked to different endings:

As you can see from the list above, certain endings will need to be completed to get certain oufits. You can check out the overview here-under to see how to get the different endings in the game.

Various paths for the 3 playable characters during the final episode “Last Drop”.

How To Get All 8 Endings in total: (Costumes And Accessories Full Guide)

To get all 8 endings, you need to repeat the “Last Drop” 4 times!
There are 2 endings for Miu and 2 endings for Yuri
Ren has 4 endings!

Missing outfits from the Wii U game:

Missing from the 2021 version of Fatal Frame 5 are all Japanese bikini outfits and the Western version’s Zelda and Zero Suit Samus outfits are gone too. Yes that sucks, but you can see them all in these 2014 videos…

Note: All DLC outfits can be accessed from the Costumes section.

Watch this Fatal Frame 5 DLC costumes showcase video to see them all:

Note: This content is included for free with purchases made before October 28th, 2021. It is possible it will be sold separately at a later date.

A costume for Yuri to dress up as Ryza, the protagonist of the “Atelier Ryza” series.
Includes the following items:

Note: This content is included for free with purchases made before November 11th, 2021. Will only be available for free for two weeks after the game’s release. It is possible it will be sold separately at a later date.

— 20th Anniversary Digital Artbook
The special anniversary digital artbook features artwork and BGM tracks from past titles of the FATAL FRAME series and can be accessed from the game menu.

— Past Protagonists Costume Set
Outfits of various past protagonists of the FATAL FRAME titles will be available in the game:

— 20th Anniversary Digital Artbook
The special anniversary digital artbook features artwork and BGM tracks from past titles of the FATAL FRAME series and can be accessed from the game menu.

— Past Protagonists Costume Set
Outfits of various past protagonists of the FATAL FRAME titles will be available in the game:

How to get the secret Camera Upgrades: In Chapter 7 on twilight peak go to the shrine on the North-East, open it to find 3 dolls are missing. You will be asked to take a reveal picture showing 3 locations on the peak. Go take the 3 pictures and as a reward each will give you a doll. Once done, place all 3 dolls back in the shrine to get the lens for your efforts.

Here are a couple of handy Fatal Frame: Maiden of Black Water tips and tricks you should know before you start playing the game.

Afraid of ghosts? No? Prove it! Fatal Frame: Maiden of Black Water is available now, transporting fright fans to the eerie Mt. Hikami, a sacred location haunted by bizarre and unfortunate occurrences — and a place where the water is believed to be housed by vengeful spirits. Think you have what it takes to repel the deadly ghosts and uncover the mysteries surrounding Mt. Hikami? Here are 12 tips and tricks to help you get started on your scary journey.

Once you’ve arrived at Mt. Hikami, it’s time to put your senses to work. Hold down RT to focus and heighten your senses, allowing you to see a silhouette that shows you the path to your next destination. Those silhouettes are called traces — shadows of the past which were left behind by beings who are not part of this world anymore (at least, most of the time). Explorer beware! The traces might lead you the right way, but they can’t protect you against the countless threats roaming across the mountain!

Exorcism isn’t tourism! Before beginning each chapter, make sure to grab all the necessary items — from different film types to healing items — by trading points you acquired during the previous missions. Preparations are a given when you have to face beings ready to return from the dead.

After shooting a hostile ghost once, you will notice fragments flying around it. Those are called Spirit Fragments and are parts of the entity that were scattered following your attack. Those can be extremely useful for one main reason: Spirit Fragments are considered targets by the Camera Obscura and, when there are five or more photograph targets in the capture area the entire capture area will turn red. Taking a photo at this time will trigger a Shutter Chance, causing major damage and driving the ghosts back.

During the game, you will obtain additional lenses for your Camera Obscura. These lenses all have special effects. Use the Up and Down buttons on the D-Pad to switch between them and press RT to use the current one. Using these Lenses consumes Spirit Power but will prove useful to defend yourself against powerful entities.

The hostile ghost is still here. You see it coming. Drawing near, only a few feet away from you, but hang on! To repel it in the most effective way you must wait until the last second before it attacks you. Can you hear it? Can you see it? Your viewfinder became red and an alarm-like sound is ringing. Now is the time to press down the shutter. What you did was a Fatal Frame, a powerful attack causing major damage and driving the ghost back. But it is not over yet, the Fatal Time has just begun. Smash the shutter as many times as you can! Fatal Time allows you to take pictures in quick succession without consuming any film.

Standing in front of you is the strongest ghost you have ever faced, and even though you landed multiple Fatal Frames, you were not able to repel it! What do you do now? Keep calm and change film. You can change the type of film of your Camera Obscura by pressing the left or right direction on the D-pad when aiming. 7, 14, 61, 90 … the higher the number the stronger its power to repel spirits. Be careful though, only the Type-07 can be used without concern for quantities, but it lacks in power and is slow to recharge. The others film types have to be bought or can be found scattered over the mountain. Rumors also speak of a Type-Zero film! What power could be hidden behind this name?

When aiming the Camera Obscura, you will see a gauge on the bottom left of the screen. This gauge represents your Spirit Power which will increase as you take photos of ghosts. The more damage you deal, the more Spirit Power you absorb.

Tip 9: “I prefer the mountain over the sea” said no one in this game.

When there are items, spirits, or other clues nearby, you will see a white filament on your screen. Go in its direction to find something worth noticing. However, be on guard. If the filament is not white but red, that means a hostile ghost is nearby. Get your Camera Obscura ready before it is too late! Or you can also flee. Remember, not all battles are worth fighting.

On Mt. Hikami, water is nothing like normal. In various circumstances, such as being grabbed by drowned ghosts, this will cause your character to get wet and will fill a gauge called the Wetness Gauge. When it is full, it is time to be extremely careful. Ghosts attacking you will be far more dangerous. However, the damage you will be able to deal and the amount of Spirit Power you absorb will also increase. Be careful – being wet makes it easier for ghosts to appear.

In addition, certain special ghosts can use attacks that will make your Wetness Gauge turn red. Be extremely careful as this will increase the damage you will receive as well as gradually decreasing your health. However, it also means your attack power and ability to absorb Spirit Power will increase even more.

The Camera Obscura has a lot of secrets and can help you in ways other than repelling hostile ghosts. When there is something that can be seen only through the Camera Obscura, it may begin to react. Focus in on what it’s reacting to by pressing LB to lock on, and then turn the Camera Obscura to match the angle of the object. The capture area will turn red once you have found the correct angle. Press RT to take a photo that will reveal a hidden place or object.

You spotted a useful item on the ground and you reach out to grab it when, all of a sudden, a ghostly white hand appears from nowhere to grab you. If you quickly release the grab item button, you can avoid it, but if it does grab you, quickly move the left and right sticks from left to right simultaneously to break free.

That’s enough talking about Fatal Frame. Go play the game! Hope these tips help out in your ghostly adventure.

Do you know of any Fatal Frame: Maiden of Black Water cheats or unlockables? Let us know in the comments, you’ll get credit for finding out. – Thanks for visiting!