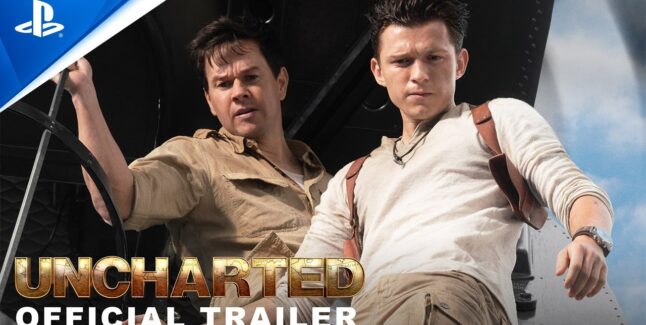 Tom Holland and Mark Wahlberg take you behind-the-scenes of Nate and Sully’s first adventure on the search for the greatest treasure never found.

The story:
The Uncharted Movie is a prequel to the PlayStation 3 & 4 Uncharted video games, starring Tom Holland as a younger Drake, showing us details of how he came to meet and befriend Sully.

Based on one of the best-selling, most critically acclaimed video game series of all time, Uncharted introduces audiences to the young street-smart Nathan Drake (Tom Holland) and showcases his first treasure hunting adventure with wisecracking partner Victor “Sully” Sullivan (Mark Wahlberg). In an action-adventure epic that spans the globe, the two go in dangerous pursuit of “the greatest treasure never found” while also tracking clues that may lead to Nathan’s long-lost brother.

Based on the PlayStation video game by Naughty Dog

I’m super excited for this movie, but you gotta admit it’s odd for a prequel to have a step-by-step re-shooting of the most action-packed pivotal scenes with Drake hanging out of an airplane from the Uncharted 2: Among Thieves game.

Plus I still feel that the original motion-capture & voice actors could play these characters just as well, but I do understand Sony has to draw a bigger audience in by attaching bigger name actors to the lead roles. I am happy to see Nolan North seems to be set to make a cameo in the movie, so it’ll be fun to see how young & old Drake will interact if their tweets are anything to go by… 🙂

Are you looking forward to watching the Uncharted Movie?