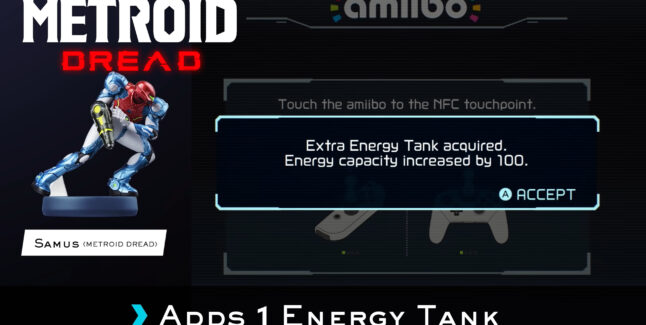 Here we will show you how to unlock all Metroid Dread codes with a Metroid 5 cheats list that’s valid for the Switch title (where available).

Unfortunately in-game cheats have been replaced by Nintendo with paid content in the form of a “SAMUS/E.M.M.I. 2-in-1 Pack” amiibo set. While it’s not as bad as hiding a Fusion Mode as $30 paid DLC in an Amiibo like Metroid: Samus Returns did, it’s disappointing to not have any hidden secret cheats in Metroid Dread itself.

New amiibo featuring Samus Aran in her Power Suit from Metroid Dread and an E.M.M.I. robot (available as a two-pack, sold separately) can be used in-game (by touching the amiibo to the NFC touchpoint that’s on/near your Switch system’s right stick) for the following effects:

This “Metroid Dread – Nintendo Switch Overview Trailer” shows the Amiibo Functionality at 4:15 minutes into the video.

Since the previous game in this saga – Metroid Fusion for the Game Boy Advance – released 19 years ago, Metroid Dread may be the first 2D Metroid game for a lot of you. As such, here are some helpful hints to keep in mind during your early explorations whether you’re new to the series or simply want to brush up your bounty-hunting skills.

After receiving a mysterious transmission, the Galactic Federation – a joint congress created by many different planets in the galaxy – dispatched a group of seven research robots called E.M.M.I. to planet ZDR. The objective: to investigate the possible presence of the deadly X parasite, a lifeform capable of mimicking organic creatures fully. However, shortly after arriving on the planet, the E.M.M.I. went dark.

Now, it’s up to Samus Aran, the most powerful bounty hunter in the galaxy, to head to this unexplored planet and find out what happened. But what she finds there is desperate terror…

“The story is introduced at the start of the game, so you’ve got nothing to worry about catching up on before starting – even if you’ve never touched a single game in this series. Illustrations of key moments are used to help bring you up to speed. Players of previous games may also enjoy seeing these moments come to life in this new way.”

If you’d like to learn more about the story of the series, please check out Vol. 4 of the Metroid Dread Report or watch this “The Metroid series story so far” video…

This adventure is part of the 2D Metroid series, known for its side-scrolling mix of exploration and action. The game itself explains the controls for Samus’ various abilities, so you can jump right in and learn as you go.

You can also fire powerful Missiles from Samus’ Arm Cannon. The number of Missiles that Samus has remaining is shown in the upper-left corner during gameplay. Replenish Missiles by scooping up items that appear when an enemy is defeated, or using a Total Recharge or Ammo Recharge Station.

Squeeze through narrow horizontal passages by using the Slide move. This can be done from a standing position, or while running.

Stun enemies by striking them during an opening in their attack. You can immediately follow up successful counters with either Beam or Missile attacks. Enemies will temporarily flash a light when their attack can be countered, so make sure you get your timing down to strike during this window. You can also whip out a Melee Counter when running, jumping, sliding or crouching.

A Melee Counter becomes a powerful Dash Melee when running. This can instantly close the gap between you and the enemy so you can land an aggressive counter. Plus, this can damage enemies, unlike other Melee Counters.

This allows Samus to aim and shoot with 360° movement. Rather than having to plant her feet as in Metroid: Samus Returns, she can use it in Metroid Dread in many different situations including while running or jumping, hanging from a ledge or crouching.

B Button near a wall while Spin Jumping: Wall Jump

Use this move to propel yourself upwards by kicking off the wall. In narrow vertical passages, you can use it repeatedly to get to previously inaccessible areas.

“One of our goals when developing Metroid Dread has been to allow for organic connections between actions. Take the Melee Counter, for example. Not only does it let you unleash a powerful follow-up attack, it also makes the enemy drop a higher-than-usual yield of ammo and Energy items, which just might turn the tide in battle. Plus, it’s just really exhilarating to land a Melee Counter, so please try doing it whenever you can!”

“At the start of the game, some enemies can be defeated with a single Dash Melee, which is a great opportunity to experience the excitement of seamlessly taking out the enemies in your way as you explore.”

The Metroid series is an ‘exploration action’ experience. As the name suggests, you explore a vast world and can grow stronger as you go. You can check out the areas you’ve explored on a map, so map-reading skills come in extreme handy. In Metroid Dread, you can open the full map by pressing the + Button.

If you move the cursor over a point of interest you’ve come across, you can see the name of it at the top.

By moving the cursor over an icon and pressing the Y Button to switch on Highlight Icon, all of the matching icons on the map become highlighted as well. This is useful if, for instance, you want to see all the doors that can be opened with a specific weapon.

Areas of the map that contain hidden items like Missile Tanks or other items will glow white.

Tip: You can place up to 6 map markers in each area by pressing the A button, this allows you to hunt down Missile Tanks more easily, as once marked on the map screen… the in-game mini-map will point an arrow to the one nearest your current location while playing. 😀

You can download the map for the region you’re currently located in by finding the Map Station. After using it for the first time, you can use this room to also save your progress.

“Maps are a very important part of the Metroid series. What new locations can you now explore with the ability you just acquired? Are there any doors you haven’t yet opened? Whenever you’re stuck, a close study of the map should clue you in on the path forward.”

“The new option to highlight icons is especially handy, since it can be used to spotlight all doors a newly-acquired ability can unlock. Remember this! Also, you don’t have to defeat all the weaker enemies you see. If you find yourself lost and retreading old ground in search of where to go next, you can choose to strategically avoid them.”

You can find new routes and expand your reach across the map by clearing certain blockages and obstacles. Some remain cleared when destroyed, but others will regenerate after a short space of time.

Destroy these with Beam attacks to clear them out of the way.

As the name suggests, you’ll need to use a Missile to remove this from your path.

These yellow-lit doors open when you shoot them with a Beam attack.

Doors with a blinking yellow light need to be hit with a Charge Beam blast before they’ll open.

You can use this station to receive intel from Adam that may help you decide where to go next. It can also be used to save your progress.

“On ZDR, there are parts of the terrain that Samus can destroy with Beam and Missile attacks. Breaking through them to open new paths is a foundational piece of exploration in the Metroid series. Some of these breakable blocks blend in well with their environment. If you get stuck, be on the lookout for suspicious spots and blast them with your Beam.”

These research robots were dispatched by the Galactic Federation but have now gone rogue. They patrol enclosed areas called E.M.M.I. Zones and will relentlessly pursue Samus if they spot her inside one. Beam and Missile attacks won’t slow them down one bit. For Samus, getting caught would mean almost certain doom…

Each E.M.M.I. can detect Samus by both sight and sound.

Once they have visually identified Samus by getting within range, they move at great speed to catch her.

Should Samus be caught, she has a slim chance to escape with a well-timed Melee Counter. However, this window of opportunity is extremely narrow and incredibly difficult to get right.

When an E.M.M.I. is alerted to Samus’ presence, the E.M.M.I. Zone locks down. Samus must get out of range or evade the attention of the E.M.M.I. before she can try to leave.

Standard attacks don’t make a dent. The only effective weapon is the Omega Cannon, a special weapon that can be obtained under certain conditions.

“Once in its clutches, an E.M.M.I. can take out its target in one hit. This fatal attack isn’t completely impossible to parry, though. Much like other enemies, the E.M.M.I. will flash a light for a fleeting moment when it’s vulnerable to a Melee Counter.”

“However, the timing of this flash varies each time, and mashing the X Button to counter won’t work; you must strike just when the time is right. This window of opportunity is very small and difficult to hit, but it’s important to keep trying.”

These are all Metroid Dread cheats found on Switch so far. So until more are discovered, we made the handy Metroid Dread guides listed above to help you with tips and tricks for the game!

Do you know of any Metroid Dread cheats or unlockables? Let us know in the comments, you’ll get credit for finding out. – Thanks for visiting!