Home » Guides » How To Unlock All Nickelodeon All-Star Brawl Characters

How To Unlock All Nickelodeon All-Star Brawl Characters 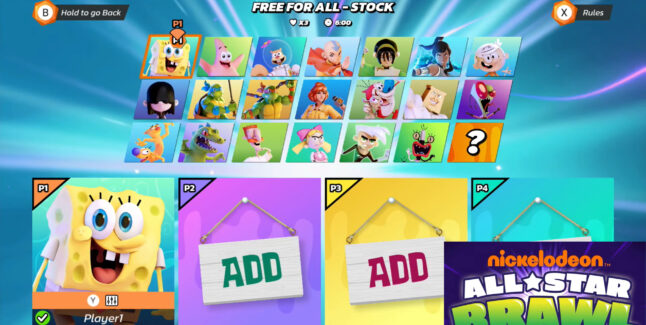 How To Unlock All Nickelodeon All-Star Brawl Characters

Developers Ludosity & Fair Play Labs have revealed all 20 playable characters are available in Nickelodeon All-Star Brawl at launch from the moment you begin playing, they are….

But there are more characters to follow through future DLC…

Below we’ve listed the 21 secret characters in Nickelodeon All-Star Brawl in the order they were discovered by PROJECT SN3K & RockmanBN‘s datamining. They were revealed by looking at the game code’s 2D texture assets and audio files. Of course these are subject to change, but we think it’s very likely these first 3 are your next couple of DLC characters!

Also, there were a lot of voice lines discovered for miscellaneous characters & stages including…

Funnily enough there are no voices for the playable characters in the game yet, so these are either a hint that voices will be added in the future or these are just background characters or tests. Whatever the case, this is just scratching the surface of the audio files as there are a ton more to go through. There are item voicelines hidden in the game files too.

Note: It’s up to the publisher to make these new characters available in post-launch DLC Packs (be it paid or free).

Question: How many characters are you planning for the initial release of All-Star Brawl, and what are your plans for DLC characters and stages down the line? When might those show up post-launch?

Answer: “At launch, there will be 20 characters, with 2 more following soon after. Additional DLC characters will be revealed after that. Stay tuned!”

Question: Because it’s called “Nickelodeon” and not “Nicktoons,” can we expect any live-action Nickelodeon characters to show up? Will players see any All That characters or something from Are You Afraid of the Dark?

Answer: “There are no live-action characters in our base lineup, and we are currently not looking at any for future characters either. You never know, but for now, we are focusing on cartoon characters. It fits in with the rest of the roster better, and we feel like we can go a little wilder in the moveset with them.”

Take the following steps to unlock each character:

What DLC Character would you like to see in the future?

Doug will not be a future DLC character due to copyright issues, because when Disney bought the series from Nickelodeon it included the Doug trademark and all rights to future merchandising.

Zuko from Avatar: The Last Airbender would be my pick for most likely to be added DLC character!

Other fan-favorites include: Rocko, and the Angry Beavers’ Norbert & Dagget.

Please share character unlocking tips you’ve discovered in the comments section below, we’ll give you credit for it. – Thanks for visiting!