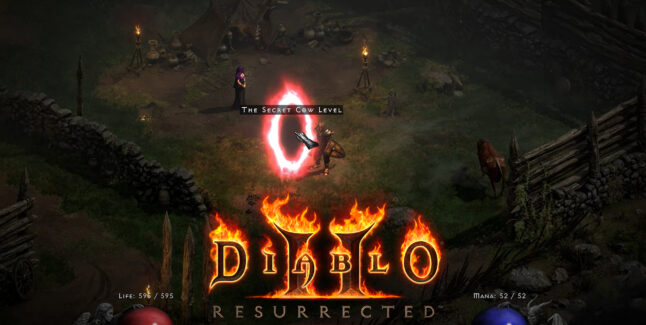 Here we will show you how to unlock all Diablo 2 Resurrected codes with a cheats list that’s valid for the PC, PS4, PS5, Switch, Xbox One & Xbox Series X versions (where available).

The secret cow level is back in Diablo 2 Resurrected, you can only activate this easter egg after you have beat the game. You then need to use Wirt’s Leg and Tomb of Town Portal in the Horadric Cube, this will spawn a portal to the secret cow farm.

The Secret Cow Level, also known as the Moo Moo Farm, can be found in Diablo II (with or without the expansion Diablo II: Lord of Destruction). To create a portal to the secret level, combine Wirt’s Leg and a Tome of Town Portal in the Horadric Cube. A red portal will appear in the Act I starting area.

Players can only create this portal when playing at a difficulty level they have already completed. For example, one must first beat the game (through Act IV in the original game or Act V in the expansion) on Normal difficulty before you can create the Secret Cow Level in a game of Normal difficulty.

There were many rumors that there was a “Secret Cow Level” in the original Diablo. Before this level was in fact created for Diablo II, the Jersey’s Jersey quest for Diablo: Hellfire was created to reference the rumor. Nowadays, Blizzard still jokingly state that “there is no Cow Level”.

These are all Diablo 2 Resurrected cheats on Xbox One, Xbox Series X, Switch, PS4, PS5 & PC.

Do you know of any Diablo 2 Resurrected cheats or unlockables? Let us know in the comments, you’ll get credit for finding out. – Thanks for visiting!