Home » Cheats » Neo: The World Ends With You Cheats

Neo: The World Ends With You Cheats 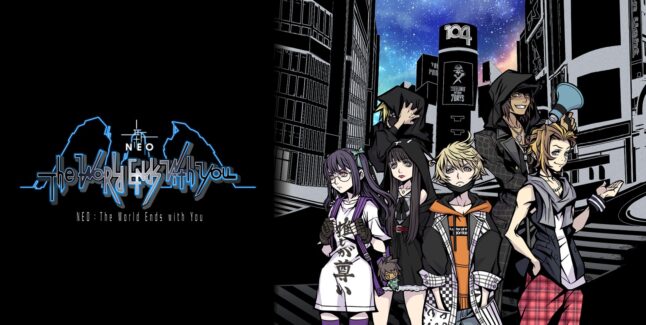 Here we will show you how to unlock all Neo: The World Ends With You codes with a cheats list that’s valid for the PC, PS4, PS5 & Switch versions (where available).

Index of Neo: The World Ends With You Guides:

Neo: The World Ends With You Unlockable DLC Items

A pre-order bonus for buying the game by August 26, 2021 includes the following three in-game DLC items:

And if you buy the game digitally via the Nintendo eShop or PlayStation Store by August 26, 2021 you will receive the “Legendary Threads Set.” It offers five equippable items once used by the legendary Neku from the first TWEWY game. These items are also normally in the game, but not until you proceed considerably far in the story. The DLC set includes:

Neo: The World Ends With You Vending Machine Code

Here’s how to solve the Vending Machine Code on Day 1 Week 2 in NEO: The World Ends With You!

The key hint towards solving this quiz. The solution: 354640. Alternatively, if your shapes are in a different order then just count the sides and that’s your number!

Neo: The World Ends With You Secret Endings

You can unlock two alternate secret endings if you collect all Secret Reports in the game and complete side-quests.

How to unlock Secret Ending #2: There’s another Secret Ending for doing the 3 optional objectives in Another Day before clearing it: Rhyme’s Dive in Dogenzaka, Coco’s Time Trial in Takeshita Street (gives you Tomonami’s Blade, an ATK +222 accessory), and Minamimoto’s fight in Expressway Underpass.

Neo: The World Ends With You Tips and Tricks

Time to go over tips and tricks the NEO: The World Ends With You game does NOT tell you when you first get started!

Lowering your HP is risky but the reward for higher Drop Rates is amazing. Now they add another mechanic to enhance that even more…

Style matters in the Shibuya UG…

In Shibuya, it helps to dress to impress. There are clothes shops all over the city, each offering tons of gear for your characters to wear.

These increase their stats and, should they have sufficient style, also give them access to some additional abilities, such as boosted HP, faster recovery times, stronger attacks and more. Some threads even offer perks for specific characters.

That’s really scraping the surface of the depth of the gear system in the game – for example, the Brand Ambassador ability gives you bonuses for wearing complete outfits from the same company. Alternatively, you can mix and match threads to create different builds, such as increased strength or defense, and more.

In short, there’s a lot of scope for experimentation here, but don’t expect the best threads to simply fall into your lap. You’ll have to go shopping regularly. No shop is the same, and each offers unique items, so be prepared to pay if you want to be as strong – and fashionable – as possible.

Here’s an important point worth stressing: Many threads have a ‘Req. Style’ rating in their descriptions, but that doesn’t mean you can’t wear them if you’re under it.

That requirement refers to the special abilities attached to the clothing only – characters can wear any gear, regardless of style, and take advantage of the stat bonuses they offer, even if the ability remains locked.

That said, if you do want to unlock each piece of clothing’s special abilities – and some of them are very useful – you should start increasing your style as soon as you can. And the best way to do that is to chow down.

There’s no substitute for a good meal

You’ll find restaurants all over Shibuya, offering everything from delicious beef bowls to warming ramen. It’s enough to make even the most cynical foodie drool.

Filling your party’s stomachs at these various eateries rewards them with bonuses to their stats, such as raising their attack, increasing their defense, or improving their style. Yes, in this game, stuffing your face can make you more stylish – truly videogames have become the ultimate form of wish-fulfilment.

Grub can seem expensive, particularly in the early game, but it’s an investment well worth making because these stat increases are permanent! The sooner you start investing in your stomach, the better equipped you’ll be for the challenges ahead.

It’s not just what you know, it’s who you know… online

Shibuya is full of weird and wonderful characters, and as the game continues, you’ll build a sprawling network of contacts.

You can browse your Social Network in the Thoughts tab of the main menu, allowing you to read up on all the people you’ve met on your adventure.

More importantly, fostering your relationships with these folks will earn you Friendship Points (FP), which you can spend to unlock rewards, such as upgrades or permanent upgrades.

There are a few ways to earn FP, so keep your eyes open for characters you know as you explore the world and look for ways to help them.

It’s entirely up to you what to invest all that lovely FP into, but we highly recommend Rindo’s HP viewer, which adds a health bar above your targeted enemy in battle.

Variety is the spice of fights

The key to success in NEO: The World Ends with You’s combat system is experimentation.

There are more than 300 pins to find in the game, each offering different abilities – or ‘pychs’ – that be used to inflict all kinds of the pain on the enemy Noise that oppose you.

In the early game, combat can seem fairly straightforward – a good mix of ranged and melee psychs will see you through. As things get more serious, though, you’ll find that you can’t rely on tried and tested pins and techniques – you’ll need to change stuff up.

Make sure you try out different pin combinations to see how they work together. There’s plenty of enemy Noise roaming the streets, which means there’s no shortage of opportunities to pick a fight and try out different setups.

A team in the Groove can dominate the Reapers’ Game

Sometimes when you’re whaling on an enemy, a circular gauge will appear. This is the Beatdrop gauge and if you hit the enemy with another psych before it counts down, you’ll increase your Groove.

Get your Groove to 100% and you’ll be able to launch a special attack called a Mashup. There are lots of different Mashups available, but they’re all devastatingly powerful and can really turn the tide of a fight, particularly with bosses.

For that reason, you’ll want to make sure that you’re regularly building up your Groove. Try to find pin combinations that offer lots of opportunities to make that Beatdrop gauge appear.

Despite its many dangers, the Reapers’ Game is designed to be flexible. You’re not forced to choose a level of challenge at the start and stick to it – you’re actively encouraged to change it up as an when you need to.

For example, choosing Hard Difficulty makes battles tougher and enemies stronger, but also rewards you with more EXP so you can level up faster. It also means you’ll get rarer pin drops at the end of fights – useful if you’re looking for some of the game’s more elusive rewards.

Alternatively, flipping the difficulty down to Easy can help you overcome some battles that would otherwise be too challenging, albeit at the cost of less EXP and more common pins. No shame in that.

To change the difficulty, you first need to purchase the option to do so from the Social Network. There are a four difficulty levels to unlock, but to get you started, the Math-minded Minamimoto will let you unlock Hard, while your eternal BFF Fret will give you access to Easy. We advise you grab them as soon as possible.

Pin enthusiasts know when to take it to another level

As you compete in the Reapers’ Game, you’ll battle Noise, gain EXP and level up to increase your HP. So far, so RPG, right?

But remember: NEO: The World Ends with You isn’t like other RPGs. In this game, you can manually lower your level whenever you want.

At this point, you may be thinking: “Yo Sqeenix-dude, this sounds crazy talk – why would we want to make ourselves weaker!?” The answer’s simple – it dramatically increases the drop rate of pins.

The more you lower the level, the more pins you’ll get at the end of a fight. If you’re looking to amass a small arsenal of attacks, or bolster your bank balance very quickly, this is a great way to do it… if you’re brave enough to take the risk.

The Records menu is an invaluable resource

The Records menu tracks your progress through the game, but it’s more useful than simply logging collectables.

For example, the Books section lets you review tutorial messages from throughout the game. If you need a refresher on a particular mechanic, head over there to read all the information you need.

Another valuable page is the Noisepedia. This tracks all the enemies you defeat in the game, offers useful advice on how to most effectively take them down, and also which pins they drop across each difficulty.

Information is power in Shibuya, and the Records menu puts it all at your fingertips – don’t forget about it.

NEO: The World Ends with You follows the Wicked Twisters across a set period of time. Once one challenge is completed, time will progress to the next day.

That may lead you to worry that you’ll miss something on a particular day… but relax. At some point in the story, and for Reasons™ (no spoilers here), you’ll be able to travel back to previous days and search for any pins, friendship points and secrets you may have missed.

There’s no FOMO in the Shibuya UG!

Do you know of any Neo: The World Ends With You cheats or unlockables? Let us know in the comments, you’ll get credit for finding out. – Thanks for visiting!

Tags: NEO: The World Ends With You