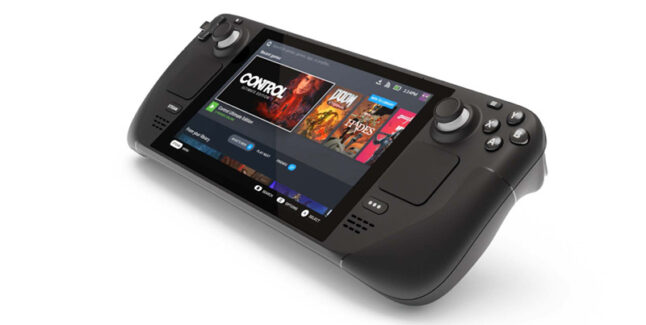 Valve has announced the Steam Deck, the first in a new category of handheld PC gaming devices. Steam Deck starts at $399, with increased storage options available for $529 and $649. Reservations open July 16th, 2021 at 10 AM PDT; shipping is slated to start in December 2021.

Steam Deck is a powerful all-in-one portable PC. With a custom processor developed in cooperation with AMD, Steam Deck is comparable to a gaming laptop with the ability to run the latest AAA games. Your Steam library will be on Deck to play games wherever and whenever you want. Steam Deck is also an open PC, adding the ability to install any software or connect with any hardware.

Watch an interview with the creators of the Steam Deck with a hands-on demonstration:

“We think Steam Deck gives people another way to play the games they love on a high-performance device at a great price,” says Valve founder Gabe Newell. “As a gamer, this is a product I’ve always wanted. And as a game developer, it’s the mobile device I’ve always wanted for our partners.”

Valve President Gabe Newell discusses the importance of the Steam Deck’s price and its development:

Looks like Valve wants a piece of the Nintendo Switch pie by introducing a competitor and making their full Steam library compatible to play on-the-go.

Are you interested in picking up Valve’s Steam Deck?