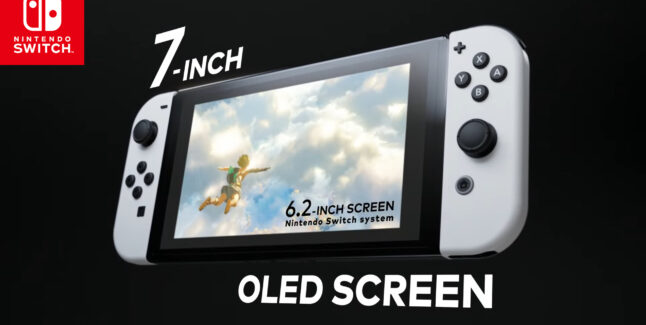 The Nintendo Switch family of systems is about to gain a new member with a bigger portable screen. The Nintendo Switch (OLED Model) will launch at a suggested retail price of $349.99 on the October 8, 2021 release date, giving people another option for how they want to play the vast library of games on Nintendo Switch.

Sadly this is NOT YET the long-rumored Switch Pro with 4K graphics capability in docked mode. Hopefuls shouldn’t expect that before Fall 2022. — Again, although it will look crisper, this OLED Model has no 4K visual upgrade. 🙁

What’s new in the Switch OLED?:

Nintendo Switch (OLED model) launches on October 8, the same day as the Metroid Dread game, the next entry in the 2D Metroid saga that kicked off with the original Metroid on NES. With the vibrant OLED screen and enhanced audio, embarking on the latest adventure of intergalactic bounty hunter Samus Aran in Metroid Dread while playing in handheld or tabletop mode will feel even more immersive.

The handheld’s battery life and weight remain the same compared to the original Nintendo Switch.

When the system launches, it will come in two color options:

For anyone that picks up this new system and wants to transfer their digital games and save data from another Nintendo Switch system, details about the transfer process can be found at https://support.nintendo.com/.

*** Nintendo Switch system (OLED model) is compatible with the full library of Nintendo Switch games. However, the system will not cleanly fit within all the design parameters of the Nintendo Labo series. There may also be games where the game experience may differ due to the new capabilities of the console, such as the larger screen size.

An OK upgrade to a 7-inch screen if you don’t have a Switch yet. But it all feels like a minimal upgrade considering Sony launched the PlayStation Vita handheld with a 5-inch OLED touchscreen TEN YEARS AGO!

Will you get the Switch OLED Model or will you wait for the rumored Switch Pro 4K upgrade?