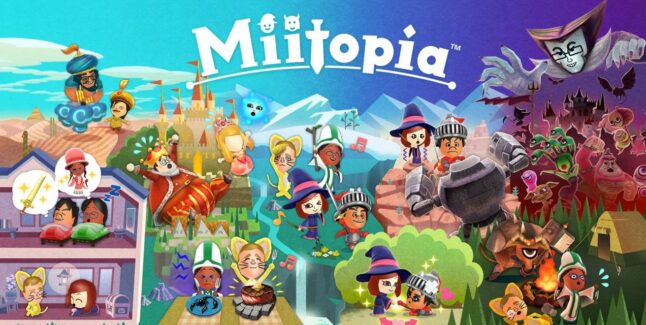 Here we will show you how to unlock all Miitopia codes with a cheats list that’s valid for the Switch & 3DS versions (where available).

How to unlock clothing by showing Amiibo figurines to the game: First you’ll need to complete two stages in Easin Hills for the “Nintendo Fan” Mii in a Mario costume to appear. Second, (s)he’ll ask if you have any Amiibo figurines to show him/her, at which point the game will prompt the Amiibo screen saying “If you have an Amiibo, touch it to the NFC area!”, which is between the right Joycon’s 4 buttons and the analog control stick. — Full unlockables list below.

All Amiibo costumes unlocked in the Switch version of Miitopia:

How to get easy money repeatedly: Go into a level without enemy encounters like “Karkaton Peak” to quickly finish it and be brought to the “Arcade” screen’s Roulette game (at a cost of 1 Game Ticket per try), keep replaying the level until you get a Roulette with a high yellow Weaponry chance to win.

This is why you must go into a level with your strongest characters, so you get rewarded the strongest possible weapons, which (once won) you can resell right away for a lot more money. Keep doing this until you have all the money you need.

How to farm more EXP: First, Level 1-5 characters can grind EXP by beating all the enemies, especially Slimes & Banshees, in the “Riverdeep Cavern” level.

There are no other Miitopia cheats on Switch & 3DS yet. So until more are discovered, we made the handy Miitopia guides listed above to help you with tips and tricks for the game!

Do you know of any Miitopia cheats or unlockables? Let us know in the comments, you’ll get credit for finding out. – Thanks for visiting!