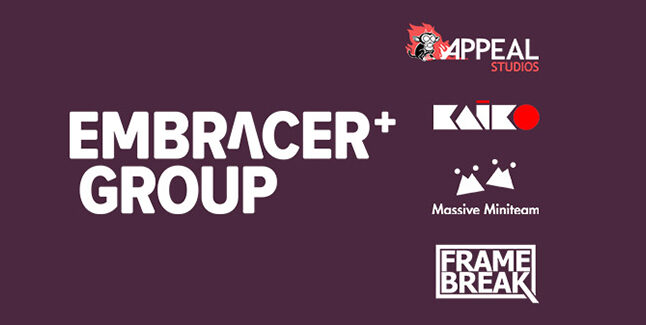 Embracer Group has acquired Appeal Studios, KAIKO, and Massive Miniteam under its THQ Nordic subsidiary, which has also established Gate21 to enable the creation of “world-class 3D characters,” as well as acquired FRAME BREAK under its Amplifier Game Invest subsidiary, the company announced.

THQ Nordic has made the following acquisitions:

Appeal Studios: THQ Nordic has acquired Belgium-based- Appeal Studios – the original creators behind Outcast (1999). Appeals Studios was founded in 2018 and is currently engaging 55 employees. The team is currently developing an innovative Open-world sci-fi action adventure that has not been officially announced. See Appeal Studios’ website for further information, appeal-studios.com.

In addition, THQ Nordic has founded and incorporated Gate21 in Sarajevo, Bosnia and Herzegovina. The team will enable THQ Nordic GmbH to have world-class 3D characters using the most advanced character and facial rigs in development projects.

Amplifier Game Invest AB has made the following acquisition:

FRAME BREAK: Amplifier Game Invest has acquired the Swedish-based studio FRAME BREAK. The studio was founded in 2020 and today has a team size of 5 persons. FRAME BREAK will be developing games based on their own IP, focusing on highly replayable co-op experiences on platforms like PC and Consoles. FRAME BREAK, based in Skövde, becomes a wholly owned subsidiary of Amplifier Game Invest, joining the ranks of 13 other game development companies already part of the Amplifier family.