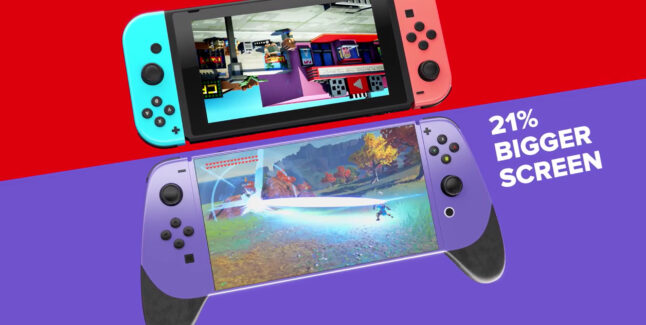 The by us dubbed New Super Nintendo Switch Pro, a long-rumored 4K upscaler chip with a 720p 7″ OLED screen upgrade to the Nintendo Switch portable console, is expected to finally arrive in Holiday 2021.

Officially codenamed “Aula”, it’s possible Nintendo will end up naming it the Switch Pro or, if they are feeling particularly nostalgic for the Super NES-era, the Super Switch.

Here’s a roundup of all the latest leaks and rumors…

The Nintendo Switch Pro release date is expected for Holiday 2021, likely mid-November 2021 in the weeks before Black Friday 2021.

But if the global semiconductor shortages hold strong throughout 2021, with semiconductors remaining in short supply due to strong demand for electronics during COVID-19 lock-downs worldwide, Nintendo may need to delay the new portable console version’s release by half a year to Spring 2022.

It will coincide with Nintendo replacing the original Switch with the new Switch Pro, while the Switch Lite remains at $199. Similar to what they did with the 3DS, 2DS & 3DS XL roll-out in the previous portable generation.

No price cuts are expected in the older Switch lineup because Nintendo simply can’t manufacture enough of them to sell*, they keep selling out at current prices. Not to mention the semiconductor chip shortages making it hard to scale up console production to meet demand.

*Note: If they can keep production lines running for three different versions of the Switch, then the prices may drop further for the Switch, Switch Lite & Switch Pro to $199, $149 & $299 respectively. This is possible due to the original hardware being 4.5 to 5 years old by time of release for the Pro.

And if the Switch Pro launch gets delayed into 2022…

Will you be buying the Switch Pro?

I will be there Day 1! What’s most exciting about the new dp2hdmi chip is not just that it is designed for upscaling HDMI output to 4K, but also that that will allow all games to not be stuck at 30FPS, but (new games will be for sure) boosted to 60FPS for a super smooth gaming experience! 😀

Tags: Bayonetta 3, Pokemon Brilliant Diamond and Shining Pearl, The Legend of Zelda: Breath of the Wild 2