Skate City Coming to PS4, Xbox One, Switch and PC 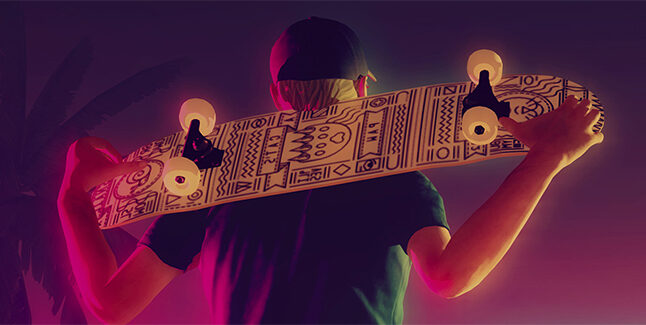 Agens and Snowman have announced that their artful, authentic street skating title, Skate City, will soon ollie on to Nintendo Switch, PlayStation 4, Xbox One, the Epic Games Store, and Steam.

Skate City, previously released on Apple Arcade, aims to immerse players in a genuine street-skating experience where they can explore real-world skate locations set to the sounds of an original atmospheric lo-fi soundtrack, making for chill vibes and good times.

“Skate City offers something a little different for players who love the sport, or just love skateboarding games. We’re really excited to see what people think, and to introduce more people to the genre!” – Andrew Schimmel, Skate City Producer, Snowman.

Skate City captures the heart and soul of street skating in an authentic light. Players will have the opportunity to explore three unique cities based off of real-world skate locations, including the streets of Los Angeles, Oslo, and Barcelona. Set to original lo-fi beats, you can ride like a local through each city’s Challenge mode, or take it at your own pace with Endless Skate. Head to the skate shop to customize your player and unlock everything else available!

• Coast through three beautiful and iconic locations based off of real world skate spots in Los Angeles, Oslo, and Barcelona.

• Hundreds of trick combinations, including flip tricks, grabs, grinds, spins, and manuals with our easy-to-use controls.

• Over one hundred challenges to complete. Or chill out and ride at your own pace with Endless Skate.

• Customize your skater by picking up a new deck, trucks, wheels, shoes, hats, glasses, clothes, or hairstyle. You can also change your skin tone while creating your skater.

• Capture and share your best runs with our in-game recording tools. You can zoom in, spin the camera and even slow down time to highlight your best tricks.