Check Out the Xbox’s January 2021 Games with Gold Trailer:

Xbox Wire: The January 2021 Games with Gold lineup is here! On Xbox One and Xbox Series X|S, confront your childhood fears in Little Nightmares and survive against a horde of zombies to get the scoop of a lifetime in Dead Rising. And for our classic lineup via Backward Compatibility, take on the best fighters in the world in The King of Fighters XIII and utilize newfound powers and hand-to-hand combat in the suspenseful action title Breakdown.

Xbox Live Gold members will have exclusive access to these games for a limited time as part of Games with Gold. With Xbox Live Gold, you get the most advanced multiplayer service, free games, and exclusive member discounts on games in the Microsoft Store — get Xbox Live Gold today to get in on the action or join Xbox Game Pass Ultimate which includes all these fantastic benefits plus access to over 100 high-quality games with Xbox Game Pass. 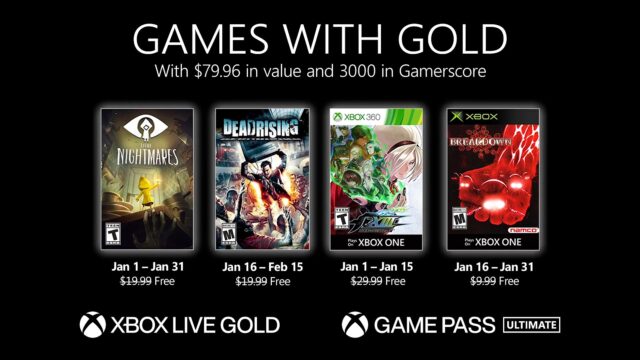 Help your character, Six, survive The Maw: a massive and mysterious vessel inhabited by corrupted souls looking to make you their next meal. Reconnect with your inner childhood and unleash your imagination to escape the horrors within and find salvation.

In this remastered version of the original game, survive the flesh-hungry undead mob in the Willamette shopping center using a range of weapons at your disposal. As photojournalist Frank West, you’ll have 72 hours to fight off the zombie horde and discover the reason behind the outbreak.

The King of Fighters XIII

An upgraded version of the original arcade classic, utilize your Hyper Drive power gauge to let loose devastating strikes and combinations. Don’t miss out on this final chapter of the “Ash Saga,” full of anger and betrayal, which ends here.

Trapped inside a mysterious lab and unable to remember his past, Derrick Cole must fight his way out using his newfound extraordinary powers. Combining hand-to-hand combat, state-of-the-art weapons, and an intense story line, embark on a thrilling and suspenseful search for the truth in this first-person action-adventure title.

Read more about our Games with Gold program hereand stay tuned to Xbox Wire for all the latest news on Xbox. Like we said before, if you’re an Xbox Game Pass Ultimate member, you get all the benefits of Xbox Live Gold, over 100 high-quality games you can play on console, PC, and Android devices with cloud gaming (Beta, where available), and access to EA Play at no extra cost. New games are added all the time, so you’re never without something new to try when you’re looking to find your next favorite game. If you’re new, or if you’re an existing Xbox Live Gold and Xbox Game Pass for Console member, join or upgrade today for just $1.