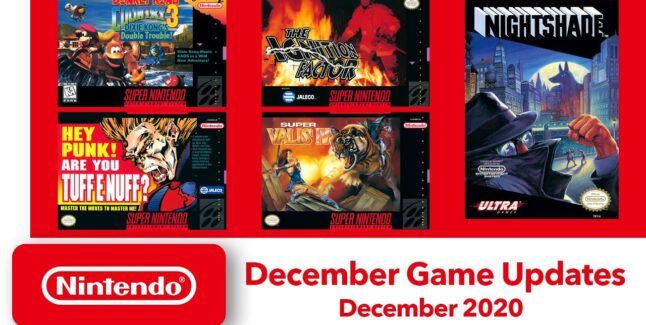 Nintendo has announced its lineup of free games for Nintendo Switch Online subscribers in December 2020. This month you get: Donkey Kong Country 3, The Ignition Factor, Super Valis IV, and Tuff E Nuff on SNES, as well as Nightshade on NES.

Donkey Kong and Diddy Kong have gone missing. As Dixie Kong checks in with the rest of the family, she gets stuck with babysitting duties! But that won’t stop her from going on her next adventure. Play as Dixie Kong or Kiddy Kong solo, against a friend or with a friend. Take advantage of their abilities as they throw each other into action in over 40 levels.

Intense firefighting action puts you in the heat of the moment. Take control of a brave firefighter as he battles to save people from towering infernos and flame-filled factories. Keep your cool to rescue all the victims. Get them out of the fire and back to safety!

A reddish moon calls forth evil, and the bells toll for battle. Take on the role of Lena, the only warrior able enough to wield the Valis sword against the forces of evil in this action platformer. The longer you take clearing a stage, the stronger the boss at its end will get. Dash, jump and use the items you collect along the way to traverse all seven stages.

Four champions seek to challenge the great tower! In this action game, your special attacks level up each time you defeat a certain number of enemies, making your hero grow even more powerful. Make good use of your guard, and carefully time your special attacks against all the tough guys you face on your way to Jade, the self-proclaimed Fighting King. With the instant-replay feature, you can have fun watching the last moments of a fight play out!

Sutekh has blanketed Metro City under a shroud of crime and corruption. The big crime bosses now answer only to him. To avenge his fallen idol, Mark Gray dons the guise of Nightshade, the last person standing between Sutekh and total control of Metro City. Using a combo of point-and-click and action gameplay styles, stalk the streets of Metro City in search of vengeance.