Microsoft has announced its lineup of free games for Xbox Live Gold subscribers in November. 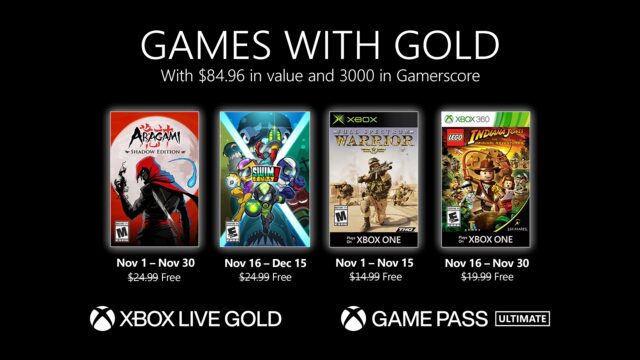 Xbox Wire: The November Games with Gold lineup is here! On the Xbox One, and the soon to be released Xbox Series X|S, dispatch your adversaries from the shadows in Aragami: Shadow Edition, and test your shooter skills in the aquatic world of Swimsanity! And for our classic lineup via Backward Compatibility, be all you can be in the original Xbox title, Full Spectrum Warrior and crack your whip and prepare for adventure in the Xbox 360 game, Lego Indiana Jones.

Xbox Live Gold members will have exclusive access to these games for a limited time as part of Games with Gold. With Xbox Live Gold, you get the most advanced multiplayer service, free games, and exclusive member discounts on games in the Microsoft Store — get Xbox Live Gold today to get in on the action or join Xbox Game Pass Ultimate which includes all these fantastic benefits plus access to over 100 high-quality games with Xbox Game Pass.

Embark on a dark journey full of blood and secrets. Including both the original game and its prequel, Nightfall, play as the undead assassin with the power to control the shadows. Dispatch your enemies utilizing a wide array of powers in the solo campaign, or team up with a friend in cross-platform online multiplayer as you put your stealth abilities to the test.

Unleash the insanity! Team up with four friends and deploy a variety of unique powerups and weapons, or battle it out against each other to be the last Mooba standing. With over 150 challenges across 8 gaming modes, the intensity doesn’t let up in this action-packed underwater co-op shooter.

Squad up and get ready for deployment in this classic Xbox title. What began as a training aid for the U.S. Army, ended up as a realistic Infantry-level urban warfare simulator. Command Alpha and Bravo squads using authentic infantry protocols, in an urban environment beset with danger around every corner.

Put on your fedora, grab your whip, and search for fortune and glory. The Original Adventures takes the fun and creative construction of Lego and combines it with the non-stop action of the classic films. Build, battle, and brawl your way through all your favorite cinematic moments in the tongue-in-cheek Lego style.

Read more about our Games with Gold program here??and stay tuned to Xbox Wire for all the latest news on Xbox. Like we said before, if you’re an Xbox Game Pass Ultimate member, you have all the benefits of Xbox Live Gold, plus over 100 high-quality console and PC games that you want to play. New games are added all the time, so you’re never without something new to try when you’re looking to find your next favorite game. If you’re new, or if you’re an existing Xbox Live Gold and Xbox Game Pass for Console member, join or upgrade today for just $1.