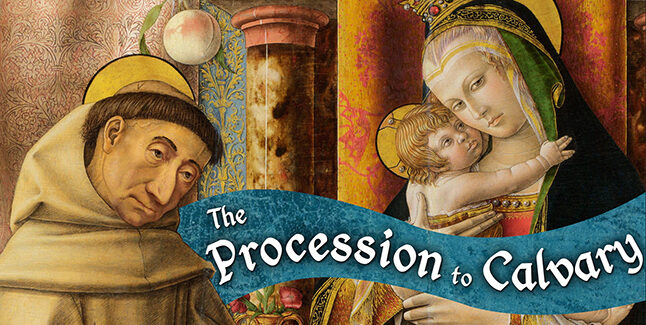 Indie publisher Digerati has announce it’s bringing The Procession To Calvary to PlayStation 4. An exact release date is still to be scheduled, but the game will be available to download from the PlayStation Store sometime in Q4 2020/Q1 2021.

Check Out The Procession to Calvary’s Announcement Trailer:

Created by UK-based solo developer Joe Richardson, The Procession To Calvary is an adventure game that evokes the surreal humour of Monty Python, and is crafted entirely from hundreds of Renaissance paintings, with works from renowned masters such as Rembrandt, Bosch, and Michelangelo painstakingly cut and pasted into a madcap montage of invigorating imagery.

“Making The Procession to Calvary was like taking a stroll through the Louvre,” Richardson recalls fondly. “Except I was trapped in there for 2 years while my life savings slowly dwindled to a pittance and I had to painstakingly draw lines around every tree in every painting before I was allowed to clamber from the depths, a husk of the man I once was.”

In The Procession To Calvary , players embark on a quest as an unnamed heroine to hunt down the tyrant Heavenly Peter. A bizarre cast of characters, perplexing puzzles, and implausible scenarios ensures the journey is a thoroughly absurd escapade.

About The Procession To Calvary

The Procession to Calvary is a Pythonesque adventure game in which you journey through a richly detailed landscape built from hundreds of Renaissance paintings.

Huzzah! The holy war is over! Your oppressors have been vanquished, the churches of the Old God lay in ruin and thousands of innocent people have been murdered! But it’s not all good news; the tyrant Heavenly Peter has escaped your clutches, and you have been tasked with finding him…

• Pointing and Clicking: A traditional point and click interface, with a ‘verb coin’ interaction menu and a simple inventory from which you can access your preciously hoarded items

• Renaissance Artwork: Paintings by Rembrandt, Botticelli, Michelangelo and many more are brought together into one consistent world

• Classical Music: A soundtrack selected to fit with the style of the artwork. Enjoy music from composers such as Vivaldi, Bach, and George Frideric Handel

• Optional Murder: Kill anyone who stands in your way and skip puzzles you don’t like. But be warned; your actions might come back to haunt you…

• Nonsense: Humour reminiscent of Monty Python. But rest assured, while some of the jokes may be ridiculous, the puzzles make perfect sense!

Tags: The Procession to Calvary