Home » Guides » Pokemon Go Fest 2020: How To Catch As Many Shinies As Possible

Pokemon Go Fest 2020: How To Catch As Many Shinies As Possible 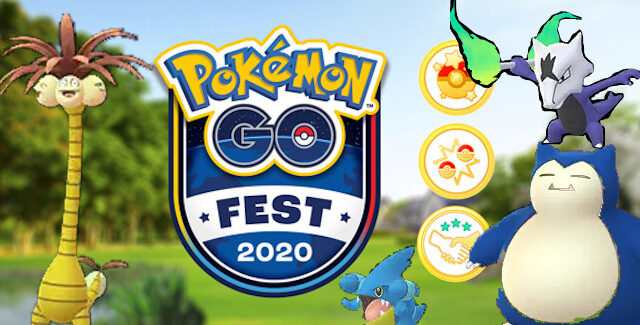 Pokemon Go Fest 2020 takes place on Saturday, July 25, and Sunday, July 26, from 10:00 AM to 8:00 PM in your local time zone each day. The big appeal of the event is it allows you to catch rare Pokemon and it features increased shiny rates.

Instead of the usual 1 in 450 shiny chance, you might encounter a shiny 1 in every 133 shiny checks, or if we’re really lucky it’s 1 in 25 like on Community Days! On past Go Fest events fans have reportedly caught between 10 to 40 shiny Pokemon on one day. Insane luck!

In all there will be over 75 species of Pokemon in the wild, in raids, and by completing Special Research tasks.

But the 75 different Pokemon species won’t all appear at once. Sunday (Day 2) is being kept a secret (a Mega Evolutions debut is hinted), but on Saturday (Day 1) there will be five rotating habitats — themed around fire, water, grass, battle, and friendship — and they will feature special Pokémon that go along with that habitat’s theme (or rather, the Pokemon’s types). These habitats will rotate every hour, so each habitat will be featured twice during the 10-hours-long Day 1.

For those of you without a ticket to this shiny fest, you will still be seeing these potentially shiny Pokemon in the wild: Alolan Marowak, Alolan Grimer, Chansey & Dratini. As well as these non-shiny but rare Pokemon: Litwick, Ferroseed, Alomomola, Chimecho & Togetic.

There are many naturally high shiny rate Pokemon. Full list of 1 in 64 shiny rate species can be seen below. This is 7 times increased from the normal 1 in 450 shiny rate, but if Go Fest is like a Community Day, that would make it 18 times more likely to encounter a shiny, so a 1 in 4 shiny rate! That would be crazy awesome!

Pokemon Go Fest 2020: How To Catch As Many Shinies As Possible

For starting players, Niantic recommends you get to level 10 first. If you are currently below Level 10, be sure to get to level 10 prior to the event in order to maximize your experience.

Free up plenty of spots in your Pokemon Box ahead of time. I cleaned up almost 500 spots. This prevents the stress of a filled up Pokemon Box. Unless it’s your favorite Pokemon or a super rare Legendary, you probably don’t need 10 or more of the same Pokemon, so clean up a little or trade them with friends or family to free up space. Or if you’ve got PokeCoins, you can now upgrade your Pokemon Box from 3,000 to 3,500 spots!
During the event you can search for 4* and 3* in your Pokemon Box to find your best catching (fingers crossed for those 100% IV’s!) every hour and star favorite the best Pokemon. Because this will allow you to throw away the terrible IV Pokemon.

Save up hundreds of Great Balls and Ultra Balls (by opening up Gifts daily before the event and spinning PokeStops), as well as Golden Razz Berries (you get them from completing raids) and Silver Pinap Berries, to make it easier and faster for yourself to catch the rare and shiny Pokemon throughout the day. Free up your bag space by deleting too many revives and using rare candy. Of course if you’re only shiny checking, then you won’t need that many of the better PokeBalls. So if you’ve already got a 100% IV Pokemon, you may just want to shiny check that Pokemon species and focus on catching other Pokemon you don’t have a good one of yet. At the end of the day if you choose to only go for catching as many shinies as possible, then shiny checking is what’s best to do, but you should still have 100 Ultra Balls and 100 Golden Razz Berries or Silver Pinap Berries to be able to catch your shinies without them running away!

Make sure you save up plenty of PokeBalls for your Pokemon Go Plus or Gotcha device (again opening up gifts daily before the event is the best way), despite spinning Pokestops during the day, you might need a few hundred PokeBalls each day. I’ve saved up 600 to be safe. This allows you to catch Pokemon in the background while you’re also catching a rare or shiny Pokemon yourself on-screen. Lots of Pokemon will appear, more than you can check, so this is a handy feature to get a better chance at getting more shinies.

Starting the Pokemon Go app: Playing the game on each of the two days will open 2 Special Research lines, but you can complete them at any time later on if you’re short on time. So if you want, you can focus on catching rare Pokemon and doing shiny checks throughout the event, and then come back to the Special Research quests after the event. So that’s good to know if you’re running out of time, although it is of course fun to do them right away.

Once the event starts each day, use Incense: Incense activated during the event will last for one hour and will be even better at attracting featured Pokémon. Around 120 Pokemon per hour (up to 150 Pokemon per hour if you use the fast catch or refresh screen tricks). Personally, once the each daily 10-hours-long event beings I will activate 10 Incense right away, as the timer for Incense and other items nowadays stacks, so you don’t need to remember to activate the next one and can just focus on playing.

While this year’s Go Fest is meant as a play from home event, if you’re in a Coronavirus stricken region of the world (and if you’re allowed by your government) you can go outside (with social distancing) and walk to your favorite park or Pokemon spawn spot and preferably play by a couple of PokeStops. Outside of walking around past PokeStops, it’s a good idea to always be near a couple of PokeStops because during this event PokeStops will be automatically lured and spawn loads more Pokemon than usual! Combine this with always having Incense running and you’re set to increase your possible shiny spawns by a large margin!

Set your Buddy to be a Pokemon you’re at least Great Buddy with, so it will give you a Catch Assist by headbutting the PokeBall back to the Pokemon if it defended itself, it’ll give you a second chance at catching the rare/shiny Pokemon without it running away. A Great Buddy will also bring you Presents throughout the event that may contain balls, berries or revives you need.

Explore all five of the habitats to find the most variety of shinies: During Day 1, there will be five themed habitats rotating each hour, and each will feature different Pokémon! So each habitat will come by twice on Saturday. And remember your most wanted shiny Pokemon from the list of Pokemon with a naturally high shiny rate (listed at the beginning of this guide). It’ll help keep you focused on rarely appearing Pokemon that also have a high chance of being shiny during Go Fest 2020.

Make sure you take regular breaks to eat, drink, recharge your phone, maybe take a quick nap like Snorlax, he knows how to relax. It’s a fun game after all! 😀

Are these not enough tips for you? Here’s a PoGo Youtuber with more:

These are just some tips from my own experience of playing Pokemon Go since 2016. Please feel free to share any tips of your own you might have. 🙂

Which shinies are you looking forward to catching at Go Fest 2020?