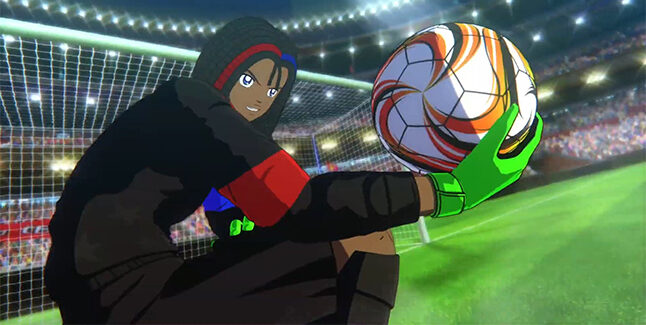 This time around the trailer likely won’t stimulate the fan’s nostalgia because it’s about the America Junior Youth team from the United States.

The United States never played a big role in the manga and anime, basically getting only mentions in passing and sporadic appearances off the field.

It did appear in previous games but looks like it’s getting a facelift for the big screen with new players. Hence, we meet the new goalkeeper Cheikh Azwan and the forward and captain Blake Martin, who are brand new characters like the team itself.

“American Junior Youth? A team that has great physical strength with talents who were greedily gathered and have been trained through the latest technologies and trainings. Most of the players are from the soccer school that Cardinal established.

A forward who represents the US.

He is proud of his gifted physique and built muscle, and has a belief that aggressively prioritizes “power” during a soccer game.

A goalkeeper of the US team.

He catches opponents’ shots with his competitive spirit and splendid physical abilities.”

Captain Tsubasa: Rise of New Champions is currently developed by Tamsoft, and it will release for PS4, Nintendo Switch, and PC worldwide in 2020.