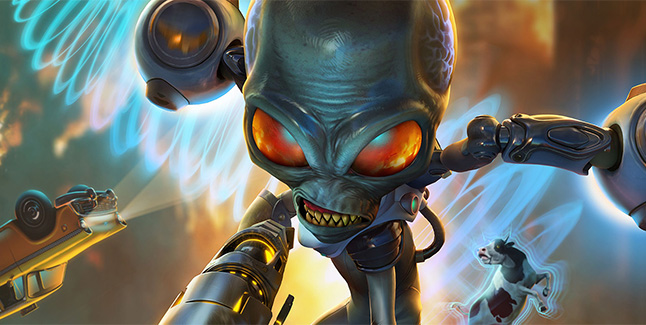 The release date for Black Forest Games’ Destroy All Humans! remake has been revealed, with the game launching on July 28th, 2020. The remake was revealed back in June 2019 and will land on PC, PlayStation 4, Xbox One and Google Stadia at launch.

Check Out the Destroy All Humans! Remake Pre-order and Special Editions Trailers:

Destroy All Humans! is a remake of the 2005 cult classic developed by the now-defunct Pandemic and follows Crypto, a smack-talking alien who terrorizes a 1950s township, claiming the precious brain stems of the human populace. The game released on PS2 and Xbox and was a hit with fans for its irreverent humour and chaotic gameplay, which has been reimagined for current-gen consoles.

Those who pre-order the game will also receive a set of skins that are debuted in the trailer, including one that dons Crypto in a white bodysuit that is clearly a homage to Memphis crooner Elvis Presley.

The Crypto-137 Edition, featuring a Crypto-137 figurine, a Crypto backpack, keychain, six lithographs, anti-stress toy and all in-game Crypto skins, all contained within a premium box, is available for pre-order now and has an SRP of €399.99 | $399.99 | £349.99 | seven tons of mutilated cow corpse juice’s worth of Crypto currency.

The DNA Collector’s Edition, featuring a Crypto’N’Cow figurine, keychain, six lithographs, anti-stress toy, and all in-game Crypto skins, all contained within a premium box, is available for pre-order now and has an SRP of €149.99 | $149.99 | £139.99 | twelve charred human femurs’ worth of Crypto currency.