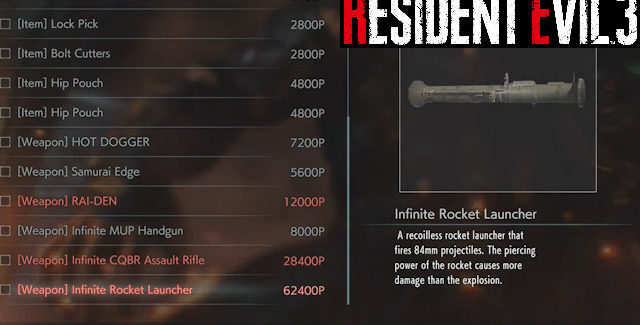 How to Unlock Infinite Ammo in Resident Evil 3 Remake

Here’s for Resident Evil 3 Remake all weapons that have Infinite Ammo and how to get them for Jill Valentine and Carlos Oliveira!

How to unlock infinite ammo: Finish Resident Evil 3 Remake’s story campaign once. After that’s completed, play the game a second time to be able to earn Points by completing chapters, boss fights and other in-game challenges.

If you earn enough Points*, you can either buy infinite ammo weapons or items you can hold to upgrade your character abilities.

After completing the game, after you buy any of the unlockable weapons, then you have to start a new game and you’ll receive the weapon when you open a chest.

How to get to the item shop: Pause the game to get into the Main Menu, then select Bonuses and Shop.

Whether you call it a cheat, a glitch or a feature, these special weapons have infinite ammo built-in, so you’ll never run out of ammo again. These unlimited ammo weapons can be unlocked with Points and will make any subsequent playthroughs of Resident Evil 3 Remake much more fun, because you won’t be worried about ammo management anymore.

And that’s the complete list of weapons with infinite ammo cheating in Resident Evil 3 Remake!

* How to farm kills for Points on a new game to get the Infinite Rocket Launcher in one hour:

If you save just before the Carlos hospital fight (preferably on Assisted Mode), you can farm assault rifle and handgun kills easily. Once you beat that location, it is very easy to farm grenade launcher and magnum (and shotgun) kills at the fuse part. Just have a save set up that has the bridge raised for the fuse where the two container doors blow off and that’s an easy 7 kills with the magnum every 40 seconds.

Note: Farm kills for two hours to unlock / buy all coins, pouches and the RAI-DEN.

Do you know of any more Resident Evil 3 Remake unlimited ammo cheats or infinite usage unlockables? Let us know in the comments, you’ll get credit for finding out. – Thanks for visiting!