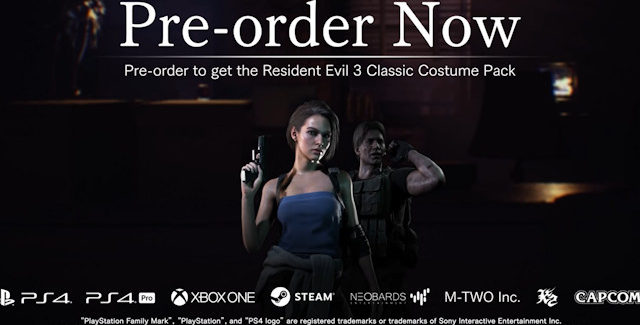 Here we will show you how to unlock all Resident Evil 3 Remake codes with a cheats list that’s valid for the PC, PS4 & Xbox One versions (where available).

How can you get the unlockable Classic Costumes Pack DLC for Resident Evil 3 Remake?

All standard and Collector’s Edition pre-orders of Resident Evil 3 Remake (at participating retailers) will receive an exclusive Classic Costume Pack that features Jill Valentine’s original outfit as well as Carlos Oliveira’s original hairstyle. Perfect if you want to get into that 1990’s vibe as you play.

How to access the Classic Costume Pack DLC in Resident Evil 3 Remake?

After claiming your Classic Costume Pack code in the store of your gaming platform of choice, make sure you download the Classic Costume Pack onto your gaming system before starting Resident Evil 3 Remake itself. That way you’re sure it’s been installed and upon startup of the game you’ll receive a message saying: “Obtained a special costume. You can change costumes from the Costume menu.” Next, simply change your character outfit in the in-game pause menu, by pausing the game and then selecting “Story” followed by “Costume”.

How to unlock infinite ammo cheat codes in Resident Evil 3 Remake?
Complete the game’s story campaign once. Upon playing the game a second time (and beyond), you’ll be able to earn Points by completing chapters, boss fights and other challenges. — If you earn enough Points*, you can either buy infinite ammo weapons or items you can hold to upgrade your character abilities.

All cheats you can unlock by buying them; sorted by price from low to high:

After completing the game, after you buy any of the unlockable weapons, then you have to start a new game and you’ll receive the weapon in-game when you open up a chest.

* How to farm kills for Points on a new game to get the Infinite Rocket Launcher in one hour:

If you save just before the Carlos hospital fight (preferably on Assisted Mode), you can farm assault rifle and handgun kills easily. Once you beat that location, it is very easy to farm grenade launcher and magnum (and shotgun) kills at the fuse part. Just have a save set up that has the bridge raised for the fuse where the two container doors blow off and that’s an easy 7 kills with the magnum every 40 seconds.

Note: Farm kills for two hours to unlock / buy all coins, pouches and the RAI-DEN.

Resident Evil 3 Remake has a handful of lockers, briefcases and safes waiting to be opened. Instead of checking every single room, follow this visual guide to more easily find them all along with the codes required to open them.

How to you get 4 extra slots on your inventory?
If you allow yourself to get killed, you can switch the game to Assisted Mode. Which is essentially Easy Mode and it gives you 4 extra slots to hold more items and an assault rifle to use.

Tip: When a walker zombie grabs you, shaking the analogue stick(s) and/or smashing the face button will get the zombie off you faster.

Do you know of any Resident Evil 3 Remake cheats or unlockables? Let us know in the comments, you’ll get credit for finding out. – Thanks for visiting!