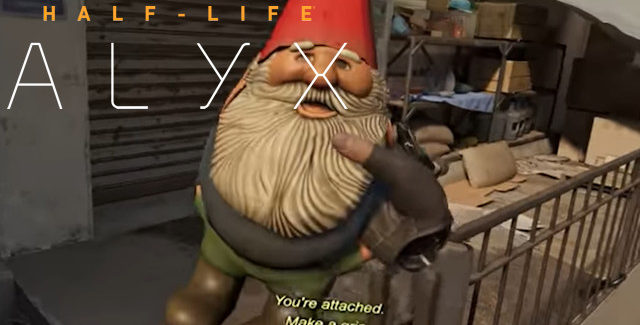 Let’s take a look at some funny Half-Life: Alyx easter eggs! They can be found if you know where to look! 🙂

Easter eggs have been confirmed for Half-Life: Alyx. Watch footage of them all below.

Make sure you stop scrolling down if you want to avoid game spoilers.

Unlikely Negotiator Of Peace Garners Ill Will And Distrust As Well As Praise.

By Helene Thompson; Staff Reporter of The Terminal.

Decades spent on the cutting edge of abstract physics put Dr. Wallace Breen in a unique position to negotiate a sweeping multinational surrender to the extraterrestrial invasion force known as “the Combine.”

But a lifetime ensconced in the bureaucracy of government-funded research — with its security clearances and an emphasis on theory and long-term exploration over politics and practicality — has left Breen (52) poorly equipped for the moral and political scrutiny his actions have invited.

Critics have accused him of rank opportunism, selling out humanity after simply being in the right place at the right time. Breen himself offers only a token rebuttal.

“Those who know me and my work know I’m not a politician,” he said in an interview televised last night. “I’m a scientist. Given the data, and the extreme nature of the situation, I took the only possible course of action.”

No politician, indeed — and that’s precisely the problem, argues Davide Ransomen of the University of Eastern Colorado’s political science department. “With no claim to a legitimate democratic mandate Breen has essentially legitimized an interplanetary coup.” Ransomen told The Terminal.

Those sympathetic to Breen say the military realities of the unprecedented assault rendered traditional notions of democratic legitimacy irrelevant.

“Any ability to communicate with our invaders outweighed issues of governance,” said retired General Stanley Thorberg,” a former commander of NATO forces and a frequent defender of Breen in the days since the ceasefire. Would you rather we died? Or worse.”

The News *** World-Wide *** WITNESSING THE UNKNOWABLE [World map shown with conflict areas everywhere]: No pattern has been discerned for where or when a portal will open

It’s True: Window to Another Place Open Across the Globe [Photo shows humans looking at a portal from trans-dimensional border world Xen opening up in the sky above]

By Greg Ip; Staff Reporter of The Terminal.

On behalf of hundreds of national governments, the United Nations has ceded the entirety of the planet Earth, with all its states and peoples, to the extraterrestrial invaders dubbed the “Combine.”

The events have prompted speculation that the so-called “portal storms” of recent days, which have caused panic and chaos across the globe, may have been intentional prelude to an attack. Previous attempts to explain the storms have varied, with explanations ranging from the meteorological consequences of climate change to clandestine scientific experiments. There is little consensus on any of the unprecedented events, but some prominent biologists and zoologists believe the Combine to be a species distinct from the lethally aggressive creatures the storms continue to spawn.

Governments’ abilities to protect their citizens had been stretched to the breaking point by the time the more coordinated Combine force arrived. When Dr. Wallace Breen, administrator of a little-known New Mexico research facility, contacted U.N. officials claimed he had determined how to communicate with the invaders, there was no appetite for resistance. Breen was given carte blanche to negotiate for peace at all cost, and he took conn [text repeats after this sentence]

State of the Market: Not Good

Have you found any Half-Life: Alyx easter eggs?