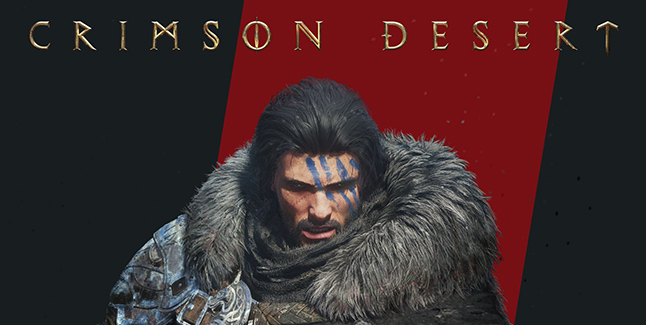 Pearl Abyss debuted the first trailer for newly announced open-world fantasy massively multiplayer online RPG Crimson Desert during its G-Star 2019 press conference, as well as announced plans for release on console and PC. A beta test is planned for 2020.

Here is an overview of the game, via lead producer Jason Lung:

“Crimson Desert‘s subtitle, ‘A Saga Written in Blood,’ encapsulates the epic events that will test our mercenary heroes. Blood will be spilled. The character you see in our key art is Macduff, son of Martinus. He’s the leader of a ragtag band of mercenaries. Here is a man in constant turmoil, struggling with the responsibilities of leadership and the survival of those who rely on him, and a tragic past that no matter how hard he tries, he cannot escape from. As such, Crimson Desert is a story of growth and resilience. It is a story of mercenaries plagued by hardship and pain, and their endeavors to survive in a hostile world.”

“Crimson Desert tells the story of many different characters, whose fates are entwined with the main character and his band of mercenaries. Each has their own unique settings and tales to tell, affecting everything from the decisions they make, down the gear they equip. And it doesn’t end with our main band of mercenaries. The lands are full of other mercenary groups, each with their own distinct personalities and inclinations.”

“Crimson Desert offers an immersive single-player campaign teeming with engaging quests based on the exploits of the many mercenaries you’ll find available for hire, as well as a vast amount of content based around a more traditional MMORPG format. Here lies a world designed for you to freely enjoy, with various content at the high levels expected of a next-generation MMORPG.”

“Players will face many dangers in the world of Crimson Desert. A diverse range of creatures, both big and small, threaten your survival. This is a world of mythical creatures who are neither friend nor foe, cruel mercenaries vying for blood, and powerful figures conspiriing in the shadows of the royal court. You cannot let your guard down. To survive these bigger threats, you must learn to make strategic choices, all brought excitingly to life through Pearl Abyss’ unique, action-driven combat system.”

“But as many of you will know, your biggest friend and foe in any MMORPG is the other player right beside you. Revel is a world that is as beautiful as it is dangerous, filled with a cast of fascinating characters, mercenary groups, and others such as yourself trapped in a spiral of endless feuds and bloody battles for survival. Furthermore, in true Pearl Abyss fashion, we’ve created a world full of playable content including trade, exploration, and so much more. Everyone at Pearl Abyss is working hard to bring you the ultimate gaming experience, with realistic character representations, rich backgrounds, and action that is as thrilling as possible, whether you’re playing on PC or console.”