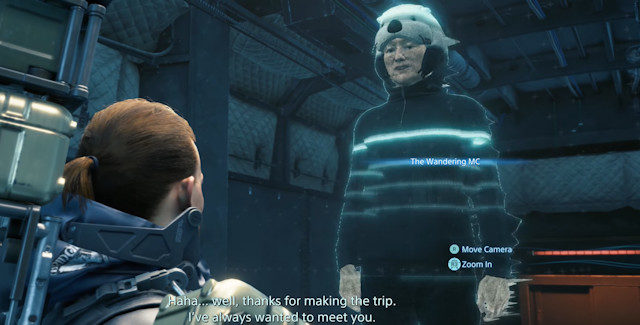 Let’s take a look at some funny Death Stranding easter eggs! They can be found if you know where to look! 🙂

Easter eggs have been confirmed for Death Stranding. Watch footage of them all below.

Conan O’Brien in Death Stranding Easter Egg. The reward for finding him is an Otter Hood which makes traveling in water much easier as you won’t drift anymore.

Conan O’Brien Location: To find Conan O’Brien, you must accept delivery order 37. Sometimes you’ll have to complete order 38 first. The delivery terminal that offers order 37 is a little random so just keep your eyes open at all the delivery options at each facility in the Central Region. The order is for delivering 2 sewing kits to the Cosplayer AKA Conan. Simply complete this delivery, north-west of South Knot City, to get to talk to Conan.

Other celebrity cameos include:

Let me know if I missed any, I’m sure a few of the Japanese fellows could be cameos, but I’m not familiar with them.

[0:32] — Benicio Del Toro’s Deadman “Aliens” & “Metal Gear Solid Game Over Screen” Easter Eggs: In the Private Room when you awaken there for the first time as part of the early story.

[1:41] — “Ride with Norman Reedus” ad: This commercial shows when you go to the toilet in the Private Room.

[2:18] — Birthday Celebration In-Game: From the Main Menu, go to Game Settings and in the Game Difficulty options you can set your birthday. If you play the game on your birthday (or set the PS4/PC to your birthday) you’ll get a bday cake & celebration emails in the Private Room; After leaving the Private Room your nemesis will even congratulate you, as well as in the open world when you interact with other user’s constructions they’ll congratulate you too.

[4:30] — Sam Bridges Breaking the 4th Wall: Get the camera close to him in the Private Room for some funny reactions.

While not a game easter egg, I thought it would be fun to end with this game cameo in the animated TV show Rick and Morty, although as part of an ad. You can see the two protagonists enter the world of Death Stranding in this bizarre cross-over.

Discoveries made by Brian & EasterEggHunter.

Have you found any Death Stranding easter eggs?