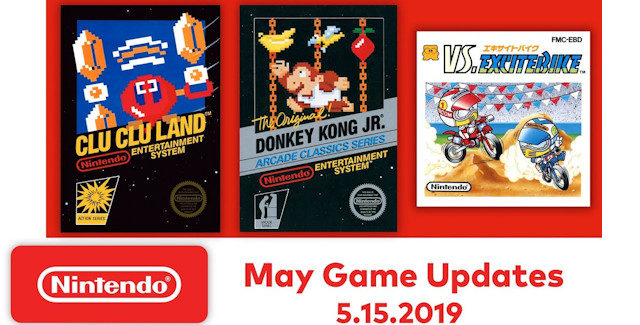 Nintendo has announced its lineup of free games for Nintendo Switch Online subscribers in May 2019. This month you get: Clu Clu Land, Donkey Kong Jr. and VS. Excitebike.

• Clu Clu Land
The greedy Sea Urchins have stolen all of Clu Clu Land’s gold bars and buried them in a series of mazes. As Bubbles, a brave bubble fish, you’ll set out to uncover all of the gold bars in each maze. But you’ll have to be careful: Sea Urchins will pursue Bubbles relentlessly, and there are also dangerous black holes that must be avoided. Bubbles isn’t defenseless, though, as she has the ability to stun Sea Urchins with sound waves and quickly change direction using posts scattered throughout the stages. Not only that but the locations of the gold bars in each maze form the outline of another object—so once you know the object, you’re well on your way to finding the gold! With 20 stages to complete and increasingly complex conditions (like having to pass over the gold bars twice to uncover them), you might just want to bring along a friend for help.

• Donkey Kong Jr.
Based on the popular arcade game, Donkey Kong Jr. is the sequel to the immensely successful Donkey Kong™. Play as Donkey Kong’s son, and rescue your dad who has been kidnapped and imprisoned in a cage by Mario. Use your jumping and climbing abilities to clamber up vines and chains, gather vital fruit and keys, and open the cage to free your father. Make sure you avoid the pesky birds, nasty electric sparks, and creepy chompers! Four different worlds filled with numerous climbing and jumping puzzles await you in this timeless classic.

• VS. Excitebike
Fans love the Excitebike game for its frenetic races, high stakes, and sweet jumps. With this game, you can take it to the next level with the Famicom disk version of VS. Excitebike— complete with 2 player split screen! Create tracks from 20 classic Excitebike track parts, and go for a best time or take on friends. Racing is even more exciting when the rivalries are real. Think you really know Excitebike? Try out the enhanced single-player mode in VS. Excitebike. It adds tracks, music, and the ability to save your high score! Find out if you have what it takes to beat the best in the ultimate version of Excitebike.