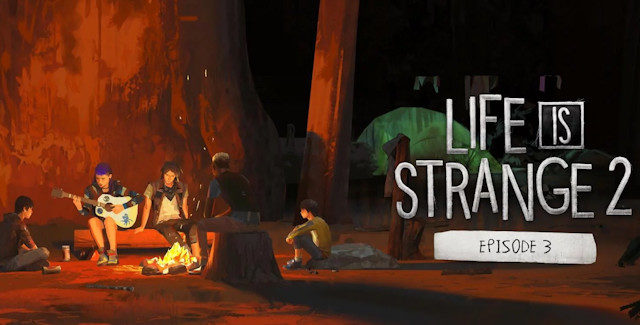 Our Life is Strange 2 Episode 3 walkthrough will guide you through the beginning to ending moments of gameplay with strategy tips for this graphic adventure game on the PC (Steam), PS4 & Xbox One.

Let’s start the Life is Strange Season 2 Episode 3 walkthrough with an introduction video!


Please note that viewers must be at least 16-17 to watch, in Europe & America respectively, so no harm comes to those with innocent eyes. This game includes Violence, Blood, Nudity, Sexual Themes, Strong Language, Use of Drugs and Alcohol.

The main characters of Life is Strange 2 Episode 3 are brothers Sean (16) and Daniel Diaz (9), two brothers living a fairly normal life in Seattle, Washington state. Following a tragic event, their lives are forever changed. Now on the run from the police and threatened with both separation and incarceration, Sean decides to take his younger brother and seek a better life in their family’s home town of Puerto Lobos, Mexico.

Life on the road is tough and dangerous. The brothers will face all manner of challenges as they bravely undertake a journey that will test the bonds of brotherhood. Playing as Sean, you will need to make the kind of tough choices you can expect from a Life is Strange game, and you will need to live with the consequences of your actions. The game will this time focus on brotherhood alongside the need to guide and educate your younger brother whilst simultaneously coming of age yourself. As with previous games in the series, Life is Strange 2 Episode 3 will tackle a host of issues that all of us can identify with and that will cause moral dilemmas and require much soul searching. These themes come together most powerfully in the way Daniel will develop depending on the lessons you teach him and the role model you decide to be.

As Sean and Daniel travel towards Mexico, they will meet an entirely new cast of characters and pass through numerous new settings. Life is Strange 2 will also include multiple features that will be unveiled over the course of the next week, as we strive to deliver the most ambitious Life is Strange entry with the highest production values in the game series to date. Jonathan Morali, the French composer who worked with the team on the first game, is also composing a new original soundtrack for Life is Strange 2 which will be supported by a brand new licensed soundtrack.

Welcome to the full Life is Strange 2 Episode 3 walkthrough!

Zombie will be your guide showing you around the game’s chapters and difficult sections in a 2.5-hours-long playthrough with English subtitles on. 😀

Episode 3 Introduction: Sean and Daniel Diaz’s journey to Mexico continues in Episode 3, a few months after the events in Episode 2 and the boys’ escape from Beaver Creek. The brothers experience life on the fringes of society, as they befriend a close-knit community of drifters and runaways, and become embroiled in an illegal trade among the towering redwood forests of California.

Sean and Daniel’s resolve is put to the test once again, as new relationships create friction between them and they both learn much about who they are as individuals. Uncertain about their once united purpose, will their bond stay as strong, or will new tensions arise?

This Episode 3 walkthrough follows the Cassidy Path Romance with good choices that lead to the Good Ending!


This Episode 3 endings video shows all possible endings!
The ending determining choices are: If you are in OR out for doing the Heist; You did Nothing and Finn wasn’t Killed.


Thanks to Square Enix & Gamerzombie for the walkthrough videos.