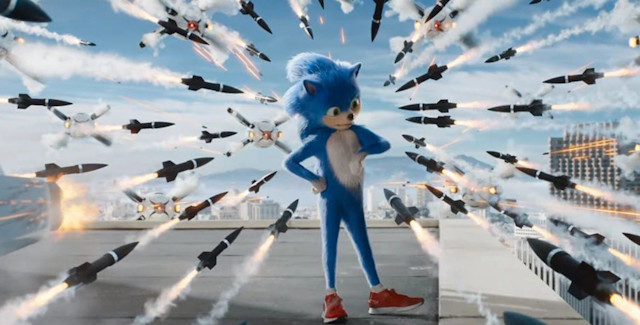 With the slogan “He’s a whole new speed of hero”, you can now watch the Sonic the Hedgehog Movie 2019 trailer, in theatres November 2019.


The Sonic the Hedgehog Movie is a live-action adventure comedy based on the global blockbuster videogame franchise from Sega that centers on the infamously brash bright blue hedgehog.

The film follows the (mis)adventures of Sonic as he navigates the complexities of life on Earth with his newfound – human – best friend Tom Wachowski (James Marsden). Sonic and Tom join forces to try and stop the villainous Dr. Robotnik (Jim Carrey) from capturing Sonic and using his immense powers for world domination. The film also stars Tika Sumpter and Ben Schwartz as the voice of Sonic.

In other news, the movie’s director — Jeff Fowler — has taken to Twitter to vow that he will fix the human-ized Sonic character design to bring it back to its more cartoony roots of the video game series. This news came after fans outraged how un-cute the movie team made Sonic in his first live-action theaters outing.

Thank you for the support. And the criticism. The message is loud and clear… you aren't happy with the design & you want changes. It's going to happen. Everyone at Paramount & Sega are fully committed to making this character the BEST he can be… #sonicmovie #gottafixfast ???

Character design worries aside, seeing Jim Carrey back to his 90’s comedy roots is going to be so much fun! I’ll definitely be watching the Sonic movie when it comes out! 😀

Are you excited for the Sonic movie?