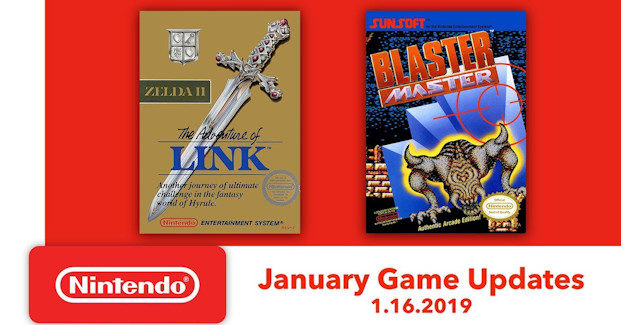 Nintendo has announced its lineup of free games for Nintendo Switch Online subscribers in January 2019. This month you get: Zelda II: The Adventure of Link and Blaster Master. And hopefully another Special game save of an already released difficult NES title.

• The Legend of Zelda II: The Adventure
Link returns to Hyrule to search for the Triforce and to awaken Zelda from an endless sleep. Embark on a quest to find the Triforce of Courage and save Hyrule from ruin. Learn magic spells, talk to people in towns to get clues, collect items to increase your power, and explore six palaces where the underlings of the evil Ganon await you. This sequel to the adventure classic uses a side-scrolling visual engine unique to the series for more technical combat, and it features more in-depth world roaming as Link encounters townsfolk while on his quest.

• Blaster Master
Jason, in search of his pet frog named Fred, has fallen down a manhole into a world of danger. Mutant-sized creatures of which the likes he never imagined, await him at every turn. In order to survive, Jason must pair up with an armored combat vehicle codenamed SOPHIA. It’s panic or perish as you blast through an endless maze of tunnels, seeking secret passages for an escape. Destroy the Plutonium Boss and his mutant cronies before these warlords destroy the Earth. Load up your arsenal, and get ready for the final encounter!