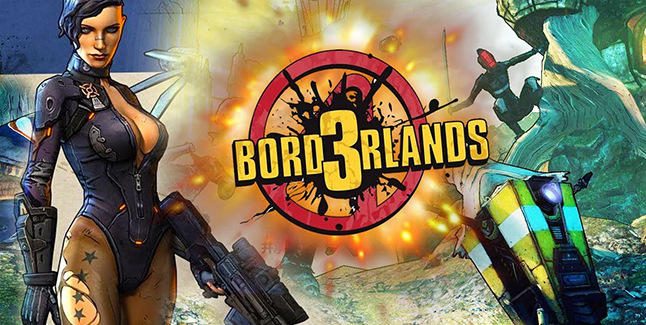 Check out the info below as I got a breakdown of the videos by “the Know” and “SupMatto”. Since this information is not coming from an official source, please take this info with a grain of salt. The next Borderlands game is still way out and things can change during the course of development.

Borderlands 3 will feature 4 playable characters, all characters are out of Alpha state except for the Hunter Class.

• The Soldier is very tech and robot featured and is able to call in a titan like the game Titanfall.

• He will have a co-op focused skill tree which will allow a co-op buddy to climb on the titan and control its mounted turret (3rd person mode?).

• The Siren is a female that will be a melee focussed character similar to Brick from Borderlands 1.

• 3 actions skills
– Phaselock that can hold 3 enemies at once.
– Groundpound skill
– Self-projection that can fire at enemies (Maybe something like the holograms that Jack “The Dobbleganer” had in Borderlands the Pre-Sequel)

• The Assassin will be similar to Zer0 from Borderlands 2 as he will be able to throw out a decoy to draw aggro.

• Wealthy character as he has some classier character customizations.

Hunter Class
The Hunter is a pet class Vault Hunter.
This Beast Master can choose between 3 different pets.
Each pet will have their own abilities.
This Vault Hunter is still in alpha state as the AI of the pet isn’t working properly.
In the past, it was mentioned by a GBX employee that AI is a difficult thing to get right.
The Beast Master is a robot and looks like a “homeless” person.

According to the source, Borderlands 3 will be announced in the 1st or 2nd quarter of 2019.

When you reach a certain point in the game you will be able to unlock a trophy room where you can display all your cool stuff. And claim bragging rights over your friends. Back in the Borderlands 2 days, a member did suggest a trophy room to display all your legendary weapons. A lot of players wanted to keep their legendary loot and collect the whole set. In order to store them all, you quickly ran out of storage space. A Trophy Room would be a nice way to display them. Maybe we can earn an achievement if we collect them all.

Fan favorite Tiny Tina returns as a Non-Playable character (NPC) in Borderlands 3. She will be 5 or 6 years older than we last saw her in Borderlands 2. So it will be fun to see how she has grown up. Claptrap will also be present in the next Borderlands game just like the surviving members of the Raiders.

Borderlands 3 will start off on Pandora but we will also visit new planets. We already have gotten a clue from the Borderlands 3 easter eggs that we will be visiting Promethea, however, we will also be visiting other planets like Eden-6. Eden-6 is a planet that is mentioned by Marcus in The Arid Badlands of Claptrap’s New Robot Revolution. New planets will also mean new enemy types. Expect new humanoid and insect-like enemies.

As our stay on Pandora is brief we will be fighting against a new enemy, the children of the vault, and their leaders the Kalypso. You will team up with the Raiders and follow them off the planet. There will be female bandits.

Weapon manufacturers will still have their unique traits but the weapons will also get more depth as they can change from element, behavior, and design. There will be new elemental types in the game.

• NPC that can revive you