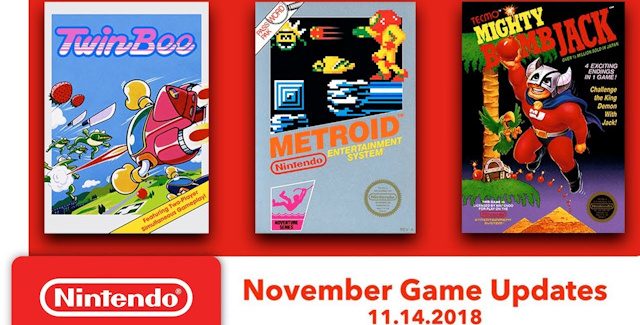 Nintendo has announced its lineup of free games for Nintendo Switch Online subscribers in November 2018. This month you get: Metroid, Mighty Bomb Jack, and TwinBee.

• Metroid
The first installment of the immensely successful Metroid series introduces us to the hideous title creatures and the slick, cybernetic bounty hunter Samus Aran. As Samus, your mission is to penetrate the space pirates’ home planet, Zebes, and keep them from destroying the galaxy with the dangerous life-forms known as Metroids. Metroid has all the high-tech weaponry, creepy tunnels, and crawly alien creatures that anyone could ask for.

• Mighty Bomb Jack
The hero of the game, Jack, must make his way through 16 levels of a pyramid in order to defeat the demon Belzebut and rescue the royal Pamera family. Each level is split into two parts: an action zone and a Royal Palace room. Action zones can be split up into several portions and contain power-ups, such as money bags, Mighty Coins, and Mighty Drinks, usually hidden in treasure chests. However, be careful to not get greedy with collecting too many Mighty Coins or Mighty Drinks.

• TwinBee
A hit sensation back in the day, this vertical-scrolling arcade game made its 1986 release on the Famicom in Japan. Guide the spacecrafts, TwinBee and WinBee, as you dodge and destroy waves of aerial and ground enemies to save the island from a ruthless conqueror. In two-player co-op mode, you can combine forces to launch extremely powerful attacks.