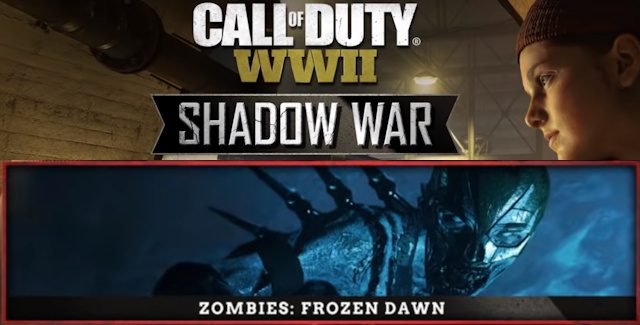 Frozen Dawn is part of Shadow War package for Call of Duty WW2, the fourth of four Zombies maps that tie together a new storyline.

This is a full guide to complete Frozen Dawn zombies map.

It is the fourth installment in Zombies’s four-part episodic narrative driven by four characters. Frozen Dawn continues our heroes adventure…

Here’s how to get started in Frozen Dawn:

Frozen Dawn, the final chapter to the epic Call of Duty: WWII Nazi Zombies story. In this experience, we rejoin Marie, Drostan, Olivia and Jefferson as they try to stop an incredible evil once and for all.

Acquiring the Sword of Barbarossa has not put an end to the undead threat. A darker and more powerful threat lurks in the depths of Thule. In the unfathomable depths of a lost city, our heroes are humanity’s last hope of ending the cult of Thule. Luckily, they will have a few secret weapons to help put the ancient rulers of the world to rest.

Thule has awakened, and malevolent powers stir beneath the ice. The Sword of Barbarossa was the key to something much larger – and much darker – than anyone had imagined. Now our weary heroes have been brought to the very Throne of Death… and Marie, Jefferson, Olivia, and Drostan are all that stand between humanity and utter destruction.

For the ancient rulers of this world have risen, and their legions march towards us in this grim, frozen dawn.

TUTORIAL #1: How To Unlock The Pack-A-Punch Machine & Turning On The Teleporter’s Power:

The Pack-a-Punch Machine can be obtained after turning on the power to the Teleporter. It is always in the same spot. As well as the mentioned The Passage red stone location that opens the door to & activates the teleporter on the Frozen Dawn map.

UP NEXT: A full Frozen Dawn walkthrough up to the ending!

Here are all the steps to take to finish Frozen Dawn easter egg puzzle:

This step-by-step video guide with handy voice-over tips by DalekDJ shows you the start of the main Easter Egg quest and lists the requirements to complete it 100%.

NOTE: The search for the easter egg solution is on-going, this is a live stream trying to figure it out… We’ll update this page with the solution!

That’s it! You will soon have all the details you need to complete the hidden Easter Egg puzzle in the new Frozen Dawn map. 😀

Big thanks to Activision, NoahJ456 & MrDalekJD for the discoveries on & after launch day!

Have you been able to complete COD WW2 Shadow War’s Frozen Dawn?