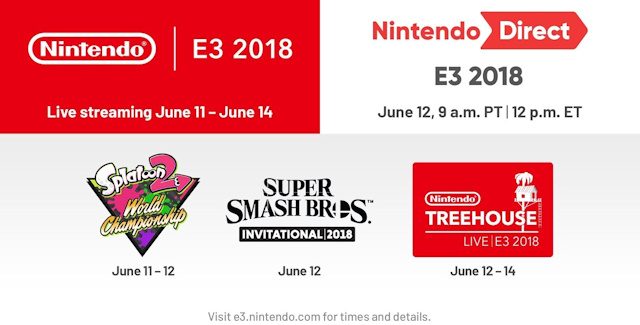 The E3 2018 Nintendo Press Conference is just a Treehouse Live this year. The broadcast aired today, and has revealed brand new information about Nintendo’s Switch game lineup. Nintendo’s E3 2018 keynote conference started on June 12th at 9:00AM PDT (Pacific USA) / 12:00PM EDT (Eastern USA) / 5:00PM BST (London) / 2:00AM AEST (Sydney, Australia) opens for 45 minutes with a spotlight and the livestream continues afterwards for 3 hours all day and again the 2 days after. What follows is a bulletpoints roundup…

• Super Mario Party gameplay trailer shown. Two Switch screen can connect together in any formation, just swipe your finger across the two screens where you want to connect them! Cool idea. Lots of mini-games, photo-mode captures the last moment of a mini-game. — Coming October 5, 2018.

• Ridley & Inkling & Daisy amiibo announced during the post-show, all 3 for the Smash series of amiibo.