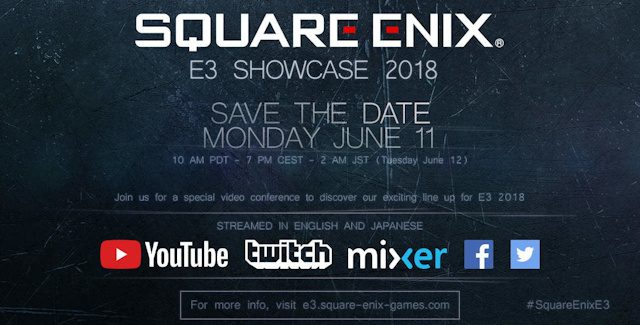 Exciting surprises this year were: Babylon’s Fall, The Quiet Man, and other games listed below.

• Shadow of the Tomb Raider gameplay trailer shown. Lara Croft tries to avert a plane crash, fails, crashes. She must now survive a dangerous jungle environment, oh and stop the Mayan apocalypse. She can shoot poisonous arrows to turn enemies on each other, she stalks her prey from the trees and bushes. She full-on knifes mercenaries in the neck now and sets them on fire. Grappling, wallrunning, full underwater swimming for new exploration to the hidden city on the island she’s stranded on. “How Lara Croft becomes the Tomb Raider she’s destined to be.” More like how she becomes a psychotic mass-murderer, but ok. 😛 — Coming September 14, 2018.

• The Awesome Adventures of Captain Spirit gameplay trailer shown. This Life Is Strange 2 introduction side-story is available for free for PC, PS4 & Xbox One on June 26th, 2018.

• Dragon Quest 11: Echoes of an Elusive Age English gameplay trailer shown. “Only you can save our world. Destiny beckons!” — Coming September 4, 2018.

• Nier: Automata – Become as Gods Edition Xbox One gameplay trailer shown of the re-release with all DLC. — Coming June 26, 2018.