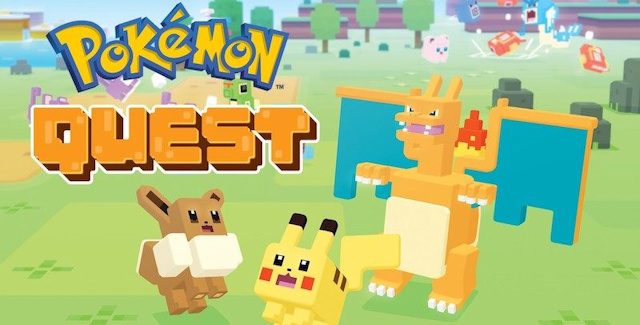 Here we will show you how to unlock all Pokemon Quest codes with a cheats list that’s valid for the Switch, iOS & Android versions (where available).

Pokemon Quest has a glitch that allows you to run away forever. You need to get your cursor just over the very edge of the run button and the cooldown is negated (mash A). You can use it to run endlessly with your last Pokemon, in order to revive the other two Pokemon in your party. This should make it a lot easier to beat the bosses! 😀

Protip: Add a healer with the Sharing Stone equipped to your Pokemon team and you can now full heal between all fights while using this glitch!

Welcome to the mysterious Tumblecube Island, packed to the rafters with Minecraft-esque cube Pokemon. In this Pokemon Quest gameplay, find out seven things you need to know before starting this free Pokemon game for Nintendo Switch.

The newest Pokémon video game is a rambunctious action RPG unlike any that’s come before it. In Pokémon Quest, you’ll build a team of adorable cube-shaped Pokémon to explore Tumblecube Island. The game’s simple tap-based controls make it easy to get into the action, whether you’re on the go or relaxing at home.

Tumblecube Island is composed of many diverse areas, each of them made up of multiple stages. You’ll take on each stage using three Pokémon, and you’ll battle wild Pokémon to earn ingredients, XP, and Power Stones. You can return to your camp after each stage to equip your team with the new Power Stones you’ve earned and to attract new Pokémon by cooking. Then, you’ll repeat the process, eventually taking on a special “Strong-Looking” boss Pokémon in the area’s final stage to earn a special prize and clear the path to more areas.

Pokémon Quest is free to download, so give it a try! It’s currently available for the Nintendo Switch in the Nintendo Switch eShop, and a mobile version will be coming soon to iOS and Android devices. Whether you’ve already begun your Pokémon Quest or you’re about to get started, we’ve got some tips to help you get acclimated in this exciting, blocky new adventure.

Your First Choice is a Key to Start

You’ll start out your journey by selecting your first partner Pokémon: Bulbasaur, Charmander, Squirtle, Pikachu, or Eevee. Your choice can have a big impact on your adventures, especially as you take on the initial stages.

Each Pokémon in Pokémon Quest has an Attack stat and a HP stat. Attack indicates how much damage they’ll deal, while HP is a measure of how much damage they can endure. The stats for your potential first partner Pokémon run the gamut—Charmander is strong offensively, Bulbasaur is very defensive, and Eevee provides an equal balance of both. It’s up to you if you’ll pick your favorite or the one that fits your desired strategy.

Unlike some other Pokémon games, your Pokémon’s type won’t cause it to take more or less damage from specific attack types in Pokémon Quest, but you can gain bonus Team Strength by including Pokémon of a specific type on your team. Each first partner Pokémon will make one early area easier, but you may find some types of Pokémon—and the bonus they provide—are less common than others, like Charmander’s Fire type.

In Pokémon Quest, instead of throwing Poké Balls, you’ll attract new Pokémon to your team by cooking. You can cook by tapping the pot located at the center of your camp and selecting ingredients. The dish you create will determine which Pokémon you’ll attract and how many stages you’ll need to take on before it’s done cooking. Whenever your pot is empty, be sure to fill it up with ingredients.

Once cooking completes, new Pokémon will enter your base camp. The game will also record the name, description, and ingredients for the recipes you create to make it easier to repeat dishes later. Each recipe can attract lots of different Pokémon, and some are rarer than others.

The texture of the ingredients you include can make a difference, too. For example, if you’re looking to add Pikachu to your team, you should create a dish including both yellow ingredients and soft ingredients. That’s a surefire way to make something favored by Electric-type Pokémon!

Your Pokémon will get stronger as they complete stages, allowing them to take on more difficult challenges. Each Pokémon has a level, just like they do in Pokémon games such as Pokémon Ultra Sun and Pokémon Ultra Moon. They’ll gain Exp. (experience points) toward leveling up every time you take on a stage, and each new level increases Attack and HP. In addition, finishing a stage will earn you Power Stones that can further boost your Pokémon’s stats. Your Pokémon will sometimes gain new sockets to equip those stones in by leveling up.

All Pokémon that evolve in Pokémon Quest do so by reaching a certain level. Pokémon that evolve by leveling up in other Pokémon games, such as Squirtle, will evolve at the same level they do in those games. What about Pokémon known to evolve with means other than leveling up, including Pikachu and Eevee? You’ll have to discover for yourself!

Beyond the experience earned by adventuring, Pokémon can also gain Exp. through Level-Up Training. Only one Pokémon will acquire experience each time you train, and to help them power up, you’ll need to say farewell at least one other Pokémon. Training with a Pokémon of the same species will get your Pokémon much more experience than training with Pokémon of a different species.

Empower Your Pokémon with Power Stones

Power Stones will be introduced to you shortly after you start playing. These handy items can be equipped to your Pokémon’s Power Charm to increase their Attack or HP. You’ll usually gain at least one new Power Stone each time you complete a stage.

Some rare Power Stones will provide special bonuses in addition to increasing Attack or HP. For instance, an Attack-increasing Power Stone may also give your Pokémon’s attacks increased Critical Hit Rate or Knockback Distance. You’ll normally want to equip Power Stones that maximize your stats, but it could be worth using a Power Stone with a great bonus and a slightly lesser contribution to Attack or HP.

Each Pokémon can know only one or two moves at a time. Pokémon of the same species can perform very differently in battle depending on which moves they know. Different attacks can have wildly different ranges and effects, such as attacking the area directly in front of the Pokémon or firing projectiles at far away foes. Since your Pokémon will move on their own, you’ll spend much of your time commanding your Pokémon to use their attacks by tapping the associated icons.

The moves your Pokémon know will impact how well they work together. A close-range Pokémon with a move that knocks foes backwards, like Roar, can be a great choice to protect Pokémon that attack from long range. Just be careful not to use this sort of attack from the wrong side of your enemies, or you might send foes vaulting into your backline instead of away from it!

If you’re not happy with a beloved Pokémon’s moves, you can use Move Training to help it learn a different one. It’ll be up to luck to find out what move the Pokémon will learn, or even if it’ll learn a new one at all. Again, you’ll have to say farewell to another Pokémon to train, and training with a Pokémon of the same species will give your Pokémon a much higher chance of learning a new move.

Take Three for the Team

You can include three Pokémon in your party at any time. You’ll get three right off the bat—Pidgey, Rattata, and your chosen first partner Pokémon.

You’ll quickly notice Pidgey acts very differently in battle than Rattata does. Pidgey attacks from long range instead of close range, so it’ll try to stay out of the heat of combat and attack from a distance. All Pokémon trend toward either short or long range, and how many of each you include in your party will greatly impact your strategy.

If you’re facing opponents with dangerous close-range attacks, you may want to use Pokémon that keep their distance for safety. Close-range Pokémon tend to excel in situations where you’ll face larger waves of enemies, and they tend to be a little sturdier, too.

Your Pokémon‘s individual Attack and HP stats are added up to determine your Team Strength. Each stage has a different recommended Team Strength, but you may find what you actually need to be higher or lower depending on how well your team fits the challenge. Remember that each stage has a “weakness” that one type of Pokémon can exploit to net you extra Team Strength. Including Pokémon of this type on your team will make it much easier to complete the stage.

Try to build up a large collection of Pokémon so you can adjust your strategy depending on the situation.

You won’t have full control of your Pokémon’s movements in Pokémon Quest. Instead, they’ll venture on toward enemies on their own. Your Pokémon will do their best without you, but they’ll perform better against tougher foes when you help them out. You can encourage them to make a tactical withdrawal by using the scatter button located on the right side of the screen. You can also use this function to help your Pokémon group up when they’ve been separated.

Scattering may seem unnecessary when you first get started, but it’s crucial against more challenging foes. The boss Pokémon that appear at the end of stages become more formidable quickly, and you’ll need to adjust your strategies to defeat them. These Pokémon often telegraph their most powerful attacks by charging up. If you have your Pokémon scatter just before one of these attacks completes, they’ll be able to avoid taking damage entirely.

This tip isn’t just for boss Pokémon. You should also keep an eye out for dangerous attacks from other Pokémon. We’d suggest being particularly careful with Pokémon like Voltorb that are known to Self-Destruct…

Make sure to log in every day to get some free PM Tickets, and new Pokémon may show up at your camp regularly, too. And don’t forget about completing challenges—they’re a great way to get extra tickets and ingredients! Clearing areas can earn you decorations that will give you special bonuses or more kinds of cooking pots to make better quality dishes.

This guide should help you get started, but some things can be learned only through experience, so get out there and take on Tumblecube Island!

These are all Pokemon Quest cheats on Switch, iOS & Android mobile devices so far. Until more get discovered, we made the handy Pokemon Quest guides listed above to help you with tips and tricks for the game!

Do you know of any Pokemon Quest cheats or unlockables?
Let us know in the comments, you’ll get credit for finding out. – Thanks for visiting!