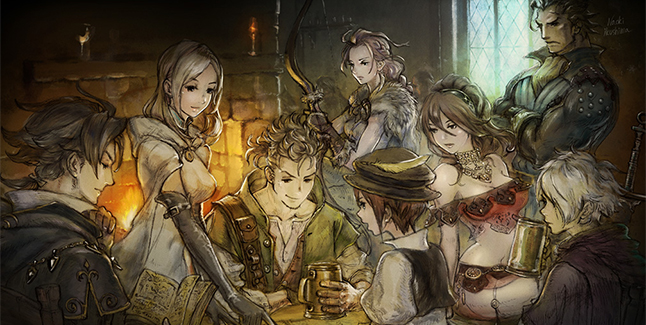 H’aanit is a hunter who lives a solitary life in a village deep in the woods. Her mentor left the village a year ago to hunt a demon called “Red Eyes”. Worried, H’aanit sets out to look for her mentor and the demon. Her Path Action is “Incite”, which she can use to set animals she has tamed on someone. In combat, she uses bows, a weapon class that has high accuracy. Hunters can also increase the critical hit chance of allies or delay the actions of enemies.

The second newly revealed character is Therion, a thief. His past is a complete mystery, but his shady appearance and the rumors that have sprung up around his mysterious origins have made the nobles and the wealthy weary of him. Naturally, as a thief, his Path Action is “Steal”, which allows him to steal items from people. You won’t necessarily use that ability only for personal gain though – you can also steal items and give them to people that desperately need them. In combat, thiefs use daggers and can strike often thanks to their high speed. They can also steal HP and SP from enemies and lower their stats. 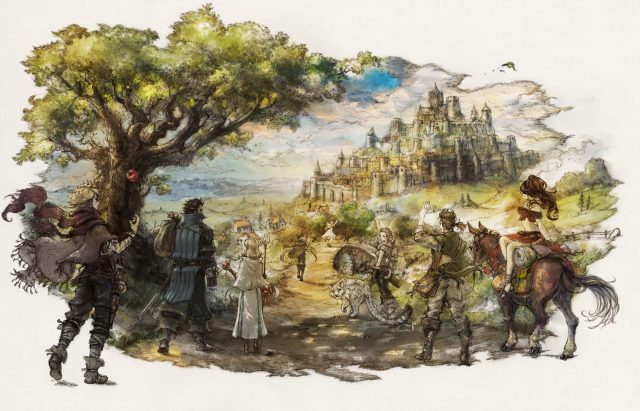 The trailer also explains Path Actions in general a bit more. Path Actions are split into two general categories: “Noble” and “Rogue”. Generally, a set of two Path Actions have the same end result – for example, acquiring items from people. The merchant Tessa can use her Field Command to buy them, whereas the thief Therion can steal them. The Noble path of buying them always succeeds, but requires you to spend money. The Rogue path of stealing is free, obviously, but has a chance of failure. Getting caught while stealing lowers your standing with other characters, which can result in them not wanting to talk to you and thus you being unable to accept certain quests. This can be fixed by talking to innkeepers and giving them money to increase your standing again.

The trailer also introduces Sub Stories. Put simply, these are side missions that take place apart from the game’s main story. Sub Stories heavily involve Path Actions, and there are often multiple ways to clear them depending on which Path Actions you use.