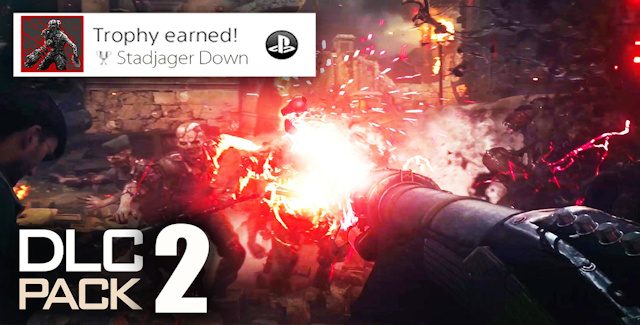 The Call of Duty WW2 The War Machine trophies guide lists every trophy for this PS4 first-person shooter game DLC #2 and tells you how to get and unlock them all.

In the Call of Duty WW2 The War Machine trophy guide we’ll show there are 10 Trophies (3 Hidden) that can be earned in the PS4 version. Earn Bronze (7) and Silver (3) Trophies to increase your Gamer Level.

Tip: How to complete all below-listed Challenges the game gives you on The Shadowed Throne map, including how to trigger them, is explained in detail in our “Call of Duty WW2 The War Machine The Shadowed Throne Guide” that shows step-by-step how to get all trophies on your way to the ending.

Tip: Do not use your pistol and throw no grenades. You can use the shovel, knife, camouflage and Nuke drops.

You’ll need to do the killing in an open area, and pick up the perk that boosts your melee hits while using the mentioned melee weapon.

3. Something Wunderful (Bronze) — In The Shadowed Throne, kill 50 Gekocht with the special weapon in one match.

This can be done without going into super high rounds, as shown in the video guide.

4. Putting on a Show (Bronze) — In The Shadowed Throne, keep a Gekocht alive on the stage for 1 minute.

Tips: To do this you have to call the Zeppelin to transform the normal zombie into a lightning-charged sizzler zombie and keep it alive for 1 minute on the stage in the Cabaret area. There are a few ways to do this:

A) In co-op and put armor and self-revive on and revive each other, or
B) Use Shel-shock (the Remove Burning mod) so just Regural Shel-shock and then super charge our meter until it’s fully red and then stun the zombie on the stage.

5. Not a Prayer (Bronze) — In The Shadowed Throne, after round 20, survive at least two full rounds without anyone leaving the church.

Tips: If you want to do this Solo get a good setup with the ShellShock ability and if you have them unlocked use the mod that bursts the zombies on fire and the sufficient energy mod for ShellShock.

You’ll see that after Round 20, you’ll have to stay inside that first little room area of the church for 2 full rounds until Round 22; You can do it later too, but it’s obviously easier to do it as early as possible. And if it doesn’t pop up for you after 2 rounds you may have stepped away from the little room, so simply play another round.

6. Equal Opportunity Destroyer (Bronze) — In The Shadowed Throne, collect geistkraft from each zombie type in a single match.

7. Lumberjack (Bronze) — In The Shadowed Throne, kill a Wustling using each melee weapon in a single match.

8. Stadtjager Down (Silver) — In The Shadowed Throne, defeat the Stadtjager.

9. Ammo Conservation (Silver) — In The Shadowed Throne, obtain the Blade without firing a gunshot.

10. This Belongs in a Museum (Silver) — In The Shadowed Throne, while inside the museum, kill 250 zombies with the Blade in a single match.

Please comment if you have any Call of Duty WW2 The War Machine trophy unlock tips of your own. Kudos will be given. – Thanks for visiting!