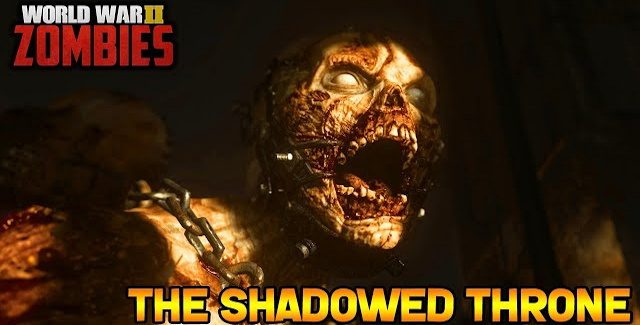 The Shadowed Throne is part of The War Machine package for Call of Duty WW2, the second of four Zombies maps that tie together a new storyline.

This is a full guide to complete The Shadowed Throne zombies map.

It is the second installment in Zombies’s four-part episodic narrative driven by four characters. The Shadowed Throne continues our heroes adventure…

Here’s how to get started in The Shadowed Throne:

The Shadowed Throne brings our heroes into the heart of Nazi Germany to confront a desperate and murderous regime. Berlin is burning, and Doktor Straub’s monstrous army is hellbent on purging his city of the Allied invaders. Join Marie, Drostan, Olivia, and Jefferson on their descent into madness in a city warped with terror, blood, and war, as Nazi Zombies step out from the shadows of history.

TUTORIAL #1: How To Unlock The Pack-A-Punch Machine & Turning On The Power:

The Pack-a-Punch Machine can be obtained after turning on the power. It is always in the same spot. As well as the mentioned power generator locations on The Shadowed Throne map.

TUTORIAL #2: Where To Get All Perk Locations:

The 6 perks can be obtained after turning on the power on The Shadowed Throne. They are always in the same spot.

TUTORIAL #3: How To Get your Wunderbuss Wonder Weapon:

The Wonder Weapon can be obtained after picking up a battery (from the museum or theater) and tuning the radio to the right frequency to call in support on The Shadowed Throne and unlocking the flare boxes to fire them to call forth lightning-struck sizzler zombies that you need to melee to obtain the wonder bolt (Geistbolt). Next, you can place this bolt in the machinery by the gate / apartments, which opens the gate for you to grab a battery to place in the same machinery, at which point you can pick up your wonder weapon.

[0:00] — STEP 1 (Set the Radio Frequency)
Your first stop on your Easter Egg Hunt and Wonder Wepon build is at the Main Street. Check the radio in the back and remember the code on top of it. You will need this at the church, where you can find a map and a chart on the wall. Look for a red pin in a named location for your first clue. Now go to the chart to your left and use the code from the radio to find the correct frequency.

Return to the radio and set the frequency to trigger a short dialogue that mentions some flares.

[1:15] — STEP 2 (Set off the Flares & get the Geistbolt)
These flares can be found in a box next to a soldier in the plaza area. Melee the box twice to set off the box and shoot a signal into the sky. The airship will now come in and target zombies with geistbolts. If a zombie is hit with one, he glows red and sprints a you. To grab the geistbolt from the zombie simply melee it.

[1:59] — STEP 3 (Get the Battery)
Next up is the battery that can spawn in several locations that chances each match. On my playthroughs i found 2 locations in the museum and 1 in the Cabaret.

[3:03] — STEP 5 (Open Pack-A-Punch with the Wunderbuss)
The last step before you can activate the Pack-A-Punch room is very simple and involves your new wonder weapon. Just outside in the spawn room you can see a small power box behind some bars. Use a grenade to open the plate and use the Wunderbuss to charge it.

• Short guide showing you how to build & where to find the Wunderbuss in The Shadowed Throne.

TUTORIAL #4: How To Unlock The Secret Camo:

• Short guide showing you how to get the secret Thule’s Errand Camo in The Shadowed Throne.

UP NEXT: A full The Shadowed Throne walkthrough up to the ending!

Here are all the steps to take to finish The Shadowed Throne easter egg puzzle:

This step-by-step video guide with handy voice-over tips by Noah shows you the start of the main Easter Egg quest and lists the requirements to complete it 100%.

That’s it! You now have all the details you need to complete the hidden Easter Egg puzzle in the new The Shadowed Throne map. 😀

Big thanks to Activision, NoahJ456, PegiGames & Randomchievos for the discoveries on & after launch day!

Have you been able to complete COD WW2 The War Machine’s The Shadowed Throne?