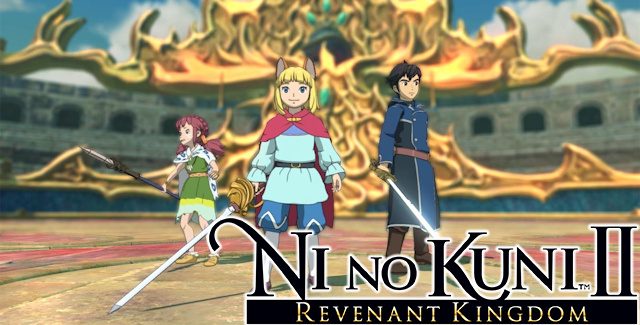 The Ni No Kuni 2 achievements guide lists every achievement for this PC JRPG game and tells you how to get and unlock them all.

In the Ni No Kuni 2 achievement guide we’ll show there are 51 Achievements (16 Secret Achievements) to earn in the PC version.

Index of Ni No Kuni 2 Guides:

5. Tripple Threat — Awarded for having 50 trip doors remember you.

8. A Bit on the Side — Awarded for completing your first side quest.

Location: Ding Dong Dell (quest icon on map)
Requirement: Reached Chapter 9
Quest Giver: Flustered Mother
Description: This is one of the trickier quests. You must find 4 hidden children. They are all in Ding Dong Dell. One by the entrance (on a small isle near city gate), one behind the tent by the Swift Solutions vendor, two by the water in the center of Ding Dong Dell. After finding them all return to the quest giver.

9. Side-Tracked — Awarded for completing 50 side quests.

10. Beside Yourself — Awarded for completing 100 side quests.

11. No Downside — Awarded for completing 150 side quests.

13. All About the Errands — Awarded for completing 50 errands.

18. Wakey Wakey — Awarded for being awakened by a golden ball.

20. Higgledy Gaggle! — Awarded for getting a set of matching higgledies!

Tips: For this you must equip 4 higgledies with the same type of head accessory. You’ll notice some higgledies have horns on their head, others have bones, sunglasses, hats, leafs etc.
Simply cook up all higgledies at the Evermore Higglery and go find all Higgledy Stones (part of the “No Stone Unturned” achievement). Then you’ll have plenty of choices.

When equipping 4 higgledies with the same head accessory you’ll see a yellow text “Higgledy Gaggle!” on the screen. It makes the attacks of your 4 selected higgledies stronger.

The easiest 4 higgledies are (can all be cooked): Pib the Peregrinator, Gyre the Flyer, Abradab the Aviator, Cummerbund the Clement.
Cook them, then equip them to unlock it! You must research better Higgledy Cookbooks first.

25. Cooking Up a Treat — Awarded for cooking your first dish.

29. Master of Magic — Awarded for upgrading your spells 50 times.

32. King of the Castle — Awarded for upgrading Evermore Castle to Level 4.

34. To Arms! — Awarded for winning your first skirmish.

Note: Requires you to do 50 unique skirmishes. Complete all side missions with the accompanying skirmishes, all on the world map (including up to Evermore Invasion #7).

40. A Matter of Time — Awarded for finishing Chapter 5.

41. The Price of Progress — Awarded for finishing Chapter 6.

42. The Mark of Kings — Awarded for finishing Chapter 7.

46. King of the Skies — Awarded for making your first trip in the Zippelin.

47. Toppler of the Tainted — Awarded for defeating your first tainted monster.

48. Scourge of the Tainted — Awarded for defeating 50 tainted monsters.

Tip: There are 60 Tainted Monsters, but the last 10 only spawn after having defeated the first 50. – But you only need to do 50 of the 60 to unlock it. Do everything in the game and you’ll be around level 75, which is high enough for you to beat the big boss.

Special thanks to Bandai Namco, Misshandlad & Powerpyx for the list, tips & guide videos.

Please comment if you have any Ni No Kuni 2 achievement unlock tips of your own. Kudos will be given. – Thanks for visiting!